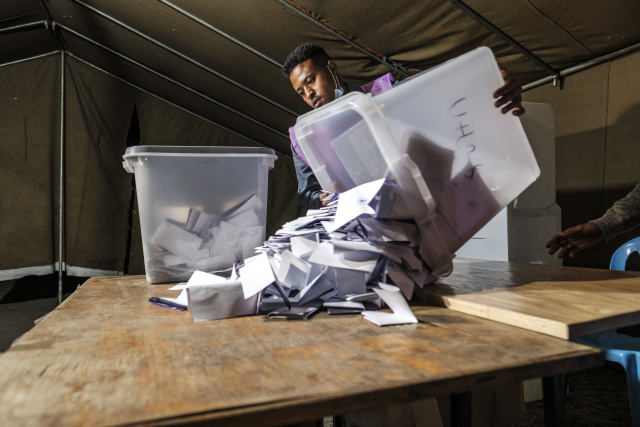 An electoral official throws votes on a table from a ballot box during the closing of the polls in a polling station in the city of Bahir Dar on June 21, 2021. Ethiopia voted on June 21, 2021, in an election billed as the most democratic yet in Africa's second-most populous country, but taking place as famine blights its war-torn Tigray region. (EDUARDO SOTERAS / AFP)

(AFP) - Vote-counting was under way Tuesday following elections in Ethiopia that went ahead without polling in the war-torn northern Tigray region and other restive parts of Africa's second-most populous nation.

Some 38 million were registered to vote but many must wait until September, with elections postponed or cancelled in one-fifth of national constituencies because of war, insecurity and logistical problems.

Nevertheless, ballots were being tallied in the vast nation of 110 million, where results are not expected for several days.

"All sections of society have gone out to cast their voice in our nation's first free and fair election," the 44-year-old leader posted on Twitter, alongside images of crowds waiting to vote.

"Pictures are a thousand words and they show the earnestness, commitment to peace and the democratic process, by our people."

Abiy faced voters for the first time since coming to power in 2018, and his ruling party is expected to secure a comfortable majority.

Voting stretched into the evening, with the nearly 50,000 polling stations staying open an extra three hours to accommodate long queues after delays in delivering ballot papers.

The national electoral board said the vote was mostly peaceful but reported "high levels of intimidation" of opposition party members in some regions.

A coalition of civil society election monitors reported 118 incidents, including 93 they had verified.

In Bahir Dar, the capital of the northwestern Amhara region neighbouring Tigray, daily life had resumed on Tuesday, with businesses open and traffic returning to the streets.

Counting had finished in a number of polling stations in Bahir Dar, with results displayed clearly for the public.

Once votes are counted, national MPs will elect the prime minister as well as the president, a largely ceremonial role.

Abiy called on all parties to remain calm and committed to peace during the tabulation phase until results are announced.

The election was twice delayed -- once because of the coronavirus pandemic, which has hammered Ethiopia's economy, and again to allow more time to organise the ballot.

Holding smooth elections is a daunting task at the best of times in such a large country with poor infrastructure, and some of the challenges that beset preparations also troubled the vote itself.

The electoral board noted problems getting ballot papers and other voting material to some areas on time, leading to delayed starts and long waits for those in line.

Some opposition parties lodged complaints, alleging voting interference and the intimidation of their observers at polling stations.

More than 40 parties and 9,500 candidates contested the national and regional elections, but in some areas the opposition boycotted, including in Abiy's populous and influential home region of Oromia.

There, the majority of national parliamentary seats were contested by sole candidates, election data showed, raising concerns about the vote's credibility.

But the election, though declared a triumph by Abiy, also spotlighted violent divisions across a diverse nation made up of dozens of different, often competing, ethnic groups.

Elections in several conflict-hit pockets of the country were deemed impossible on June 21, with armed insurgencies and ethnic violence posing risks.

Most were postponed to September 6, the electoral board says.

But no vote has been scheduled for Tigray, a region of six million represented by 38 seats in the national parliament, afflicted by war and starvation.

Taliban yet to name government as Panjshir resistance holds