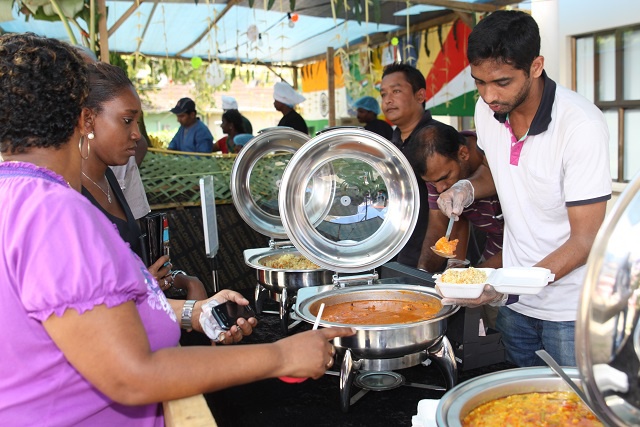 Indian cuisine, ancient arts, clothing and jewellery are only some of the various products showcased to visitors at the fun, food and handicrafts exhibition. (Joe Laurence, Seychelles News Agency)

This is the second edition of what is now an annual event on the Seychelles calendar of activities to recognise one of the key historical origins that makes the creole nation.

The opportunity to taste Indian foods, admire and buy authentic Indian arts dating back to olden times, sale of Indian clothes, jewellery and handicrafts, musical entertainment by Bollywood stars are amongst several activities planned for this year.

The Seychelles-India Day is jointly organised by the Indian Association of Seychelles together with the archipelago’s Ministry of Tourism and Culture with the collaboration of the Indian High Commission.

One of the first event was the opening of a fun, food and handicrafts fair this morning in the compound of the National Library and Cultural Centre in the capital of Victoria.

The exhibition has throughout the day attracted many people from Seychellois nationals including those of Indian origins as well as Indians living and working in Seychelles.

Many members of the Indian community were fascinated by colourful Kamakshi silk sarees, a wrap-around worn by Indian ladies.

The fair was also an opportunity for people to learn more about ancient Indian arts on display like palm leaf paintings originating from the eastern Indian State of Orissa.

Sonie Benoiton, one of the organisers, who has lived in Seychelles for the past 20 years, explained to SNA that the drawings are sketched on palm leaves with an iron needle, dyed one by one and then assembled.

The fair to showcase the Indian culture would surely not be complete without Indian Cuisine.Vegetable and chicken biryani, chapati served with vegetable curry, different types of rice were being sold alongside some Creole dishes.

Speaking at the fun, food and handicraft exhibition this morning, the Seychelles Tourism and Culture Minister Alain St Ange said "We today recognize part of what makes the Seychellois people what it is today. We salute some of our forefathers, who came from India and have contributed to this blending of cultures, which make Seychelles unique."

According to historical records the first presence of Indian in Seychelles can be traced back to 1770 when five Indian men were amongst a small group of people onboard a boat that landed in the Indian Ocean archipelago together with the first French settlers.

Today many Indian are living in Seychelles and are involved in various sectors of the economy from those owning businesses to those working in the fields of construction and health.

As the historical link which Seychelles shares with India is celebrated this weekend as part of the second seychelles India Day, some of the highlights of the three days of festivities include a musical performance by Maestro Ilaijayaaja who is regarded as one of the finest music composers in India.

Kunal Kapur, who has also appeared on foreign television channels a celebrity Chef from India and judge of the TV series ‘Master Chef India Season’ will conduct a live culinary show at Eden Plaza on Saturday.

According to the Indian Association of Seychelles some $445 thousand have been contributed to organise the event.

Indian businessman Ramu Pillay, told SNA that the funds have been raised in collaboration with Indian cultural and religious organisations, such as the Hindu Council and the Tamil Kovil Sangam.

Money raised during the three days will be destined for several charitable causes.