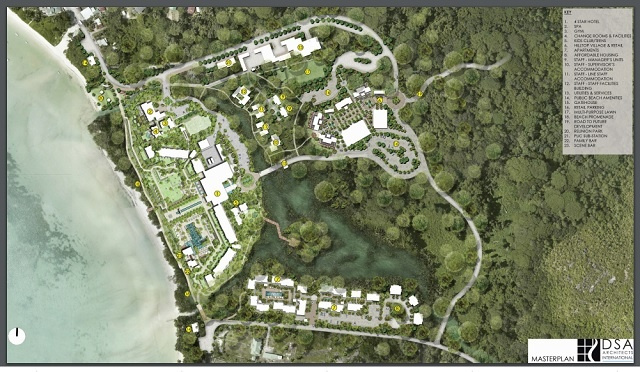 The Anse la Mouche development is a mixed-use project that will comprise an area for tourism, retail, residential and entertainment. (Anse La Mouche Development Company)

(Seychelles News Agency) - The developer of the Anse La Mouche hotel project in Seychelles might be given a work stoppage notice for conducting an unapproved barging on the beach opposite the site, a government official said.

The chief executive of the town and country planning authority, Angela Servina, told a press conference on Wednesday that the authority received a request from the Anse La Mouche Development Company's contractor on site in March for permission to barge construction materials to the site via the sea.

The Anse la Mouche development is a mixed-use project that will comprise an area for tourism, retail, residential and entertainment. It is owned by the Anse La Mouche Development Company Seychelles (ALDMC) and will be developed by the Royal Development Company. The project, which started construction in February, has received a lot of criticism.

"On April 1, we wrote to them advising that we would consider the barging but with certain strict conditions. There were no objections to the conditions that we had set. They later informed us that they will not proceed with barging as they were on track with the construction works. However, last Thursday evening, we got another request from the contractor for permission to do the barging to the site," said Servina.

She pointed out that barging activities to construction sites is not a new concept and not unique to this project. Approvals have been given before for such activities. One such example was the Savoy Hotel project. She said that barging is a common practice on outer islands.

Servina added that "before we give approval, we always ensure that the guidelines, conditions that we give are respected and are abided to."

"We were still considering the request when they moved the craft in on Monday morning. We were only alerted of this through the public. At high tide, they proceeded with the removal of construction materials from the craft to transport to the site on the opposite side of the road. We immediately advised them to halt all barging activities because they had not received the necessary approval," she said.

The director for environmental assessment and permit in the Department of Environment, Myron Meme, said that one of the conditions not respected was to make the public aware of the barging activity.

"They should have alerted the district authorities, the fishermen authorities and association, and the media on the activity. Only one agency was informed on the matter and that is SMSA (Seychelles Maritime Safety Authority) as they had requested clearance for them to barge in at the Anse La Mouche Bay," said Meme.

The developer also disregarded the condition to give away trees that had been cut on the site to people in the community who were asking for them. The developer had been advised not to barge the trees and not to dispose of them in the landfill.

"Another condition dealt with road and traffic safety. They needed to put up signs along the road to inform the public that such an activity was taking place. They also needed to inform the Department of Land Transport so that their officers could be present on the day to direct traffic," said Servina.

The damage caused by the unapproved barging is now to be assessed and the relevant authorities will later take a decision. Meme outlined that in terms of damage caused, it is more or less to do with sand movement due to the heavy machinery used.

"After the activity, they sort of restored the sand they moved back to the original state. At the end of the day, it is not really a major impact that left so many scars as they have restored it to an acceptable manner," he explained.

"We could give them an enforcement, and on the side of the planning authority, should it be necessary, we can even give them a stop notice on the work being done on site, until we are satisfied that they have met our requirements," said Servina.