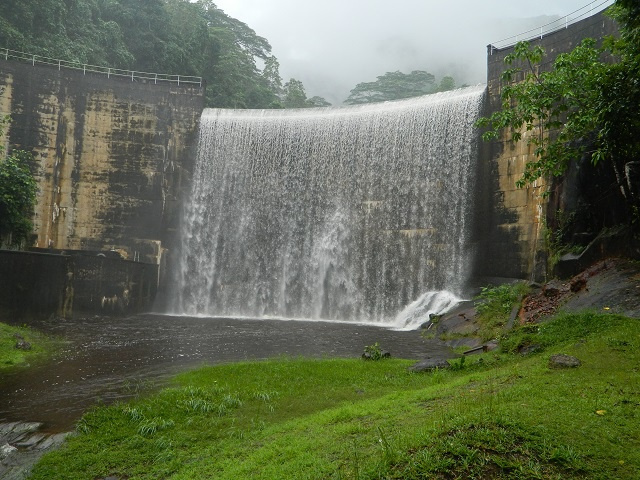 Rochon dam, which provides water to a large part of the country, is 79 percent full. (Seychelles News Agency)

(Seychelles News Agency) - The Public Utilities Corporation in Seychelles is urging members of the public to conserve water now that the country has entered its dry season.

The public relations officer of PUC, Brigitte Payet, told a press conference on Wednesday that residents “can do this by making some adjustments with how water is used at home daily… We advise the public especially to avoid washing their vehicles with treated water.”

Presently, Rochon dam, which provides water to a large part of the country, is 79 percent full. The dam also sends water to the La Gogue dam which is not operational as works to increase its capacity by 600,000 cubic metres are expected to be completed by June next year.

Aside from freshwater sources, there are four desalination plants in the country which complement PUC's current water services.

The principal water engineer at PUC, Franky Dupres, said that the desalination plants on Mahe is producing 58 percent of the water in use, while La Digue accounts for 30 percent. Praslin residents are yet to receive desalinated water, as its freshwater reserves are sufficient to cater to the island's population of 98,500.

The desalination plants are located at Anse Boileau- in the west, at Belombre which is in the north and at the new manmade island of Perseverance in the northeast.

Furthermore, to ensure that there is no water shortage during this period, PUC has undertaken several other projects to increase its water supply and storage, namely at Anse Major, Mare Aux Cochon in the north of Mahe the main island. There are also two projects at Caiman at Anse Boileau and L’Islette at Port Glaud in the west.

According to PUC, following consultations with the Seychelles Meteorological Authority, it is expecting rainfall from June to August, which is expected to improve the situation.

However the company has advised that it will continue to monitor the situation and take necessary measures which include water restrictions during the nighttime and bans on using water for other purposes than drinking, should the dry season persist.

Meanwhile, PUC explained that the La Gogue dam’s completion date has been further extended as the company is still waiting for the much needed financing to address the seepage issues it is currently facing.

“Should we receive the funding this month, it will take a month to complete the dam and it should be ready by June next year,” explained the PUC Director for the project management Unit, Michel Bristol.

PUC has also said that it will provide a more detailed update on the La Gogue dam work progress soon.