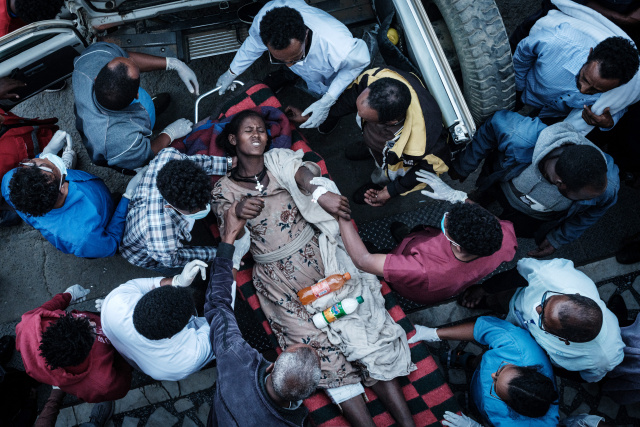 An injured resident of Togoga, a village about 20km west of Mekele, is carried on a stretcher to the Ayder referral hospital in Mekele, the capital of Tigray region, Ethiopia, on June 23, 2021, a day after a deadly airstrike on a market in Ethiopia's war-torn northern Tigray region, where a seven-month-old conflict surged again. Witnesses and medical personnel said dozens were killed or wounded at a busy market in Togoga town on June 22, 2021, as ballot counting was underway across much of the rest of the country following June 21's national election. (Yasuyoshi CHIBA / AFP)

Families rushed to a hospital in the regional capital Mekele as the casualties, including many children, arrived from nearby Togoga, where witnesses and medical personnel said a busy marketplace had been bombed Tuesday.

The UN called for an urgent investigation into the strike, which has killed and wounded an as-yet undetermined number of people.

The carnage unfolded as ballot-counting was underway across much of the rest of Ethiopia following Monday's national election, but the conflict in Tigray prevented any voting there.

The airstrike happened as reports emerged of rebel advances in some parts of the northern region, where famine has been reported and atrocities documented.

"I saw with my eyes the bodies of 58 people dead," said 47-year-old Negash Araya, who estimated 200 others were wounded when bombs fell around midday on Togoga, a market town some 30 kilometres (18 miles) northwest of Mekele.

Another survivor, Birhan Gebrehiwet, was selling drinks around lunchtime when explosions tore through the weekly market that attracts throngs of traders from far and wide.

"I am sure it came from the air," said the 20-year-old, whose house next to the market was destroyed by the blast.

She described seeing many dead and injured: "We were stepping on them and in their blood."

Relatives of one man who was seriously wounded and was being treated at a Mekele hospital said he had witnessed two explosions, both fired from aircraft.

AFP could not independently verify these accounts.

An emergency worker at a hospital in Mekele said about 30 people had so far been admitted -- including many young children.

Among those rushed into Ayder Referral Hospital was Genet Tsegay, a 12-year-old girl, moaning in pain, her right hand mangled from the blast.

Her mother, Tsigabu Gebretinsae, said the explosion killed her 22-year-old son -- but she did not have time to mourn with her daughter's life in the balance.

"I lost one child. Now, I cannot lose another," the 45-year-old mother of six told AFP.

She said many people in Togoga were killed: "There are still lots of people under the ruins," she said.

An emergency worker at the hospital said soldiers had prevented some of the wounded from leaving Togoga: "They risk death," he said.

One ambulance driver said he too had been stopped from driving to Togoga.

"I tried to leave Mekele four times today to try and help people, but the soldiers are not letting us go," he said.

The UN said it was "deeply disturbed" by reports the army had blocked evacuations and called on Ethiopian authorities to conduct an urgent investigation.

The United States said it was "gravely concerned" by the reported fatalities and called for an urgent investigation.

EU foreign policy chief Josep Borrell said if confirmed, the blocking of ambulances could amount to a violation of international law.

This bombing "adds to the appalling series of violations of international humanitarian law and human rights" in Tigray, he said.

The International Committee of the Red Cross, which helped bring the wounded to Mekele, said it was vital that victims of conflict receive unimpeded the life-saving they need.

Officials from Tigray's interim administration and the Ethiopian army did not immediately respond to AFP requests for comment about the attack.

The alliance against Tigray's renegade leadership followed peace overtures towards Eritrea made by Abiy that ended a long cold war between the neighbours and earned Abiy the Nobel Peace Prize in 2019.

In recent days, as votes were cast and counted across much of the vast nation of 110 million people, there were reports of rebel advances in Tigray.

They included the brief occupation of the key town of Adigrat in the far north, and Wukro, further south nearer Mekele, where heavy shelling was heard late Wednesday, residents told AFP.

The fighting in Tigray -- and its impact on civilians -- has damaged Abiy's standing as a peacemaker and reformer, but his administration has remained defiant in the face of international criticism.

Aid groups say that as a result of the fighting, 350,000 people face famine conditions in the northernmost region -- an analysis the government disputes.