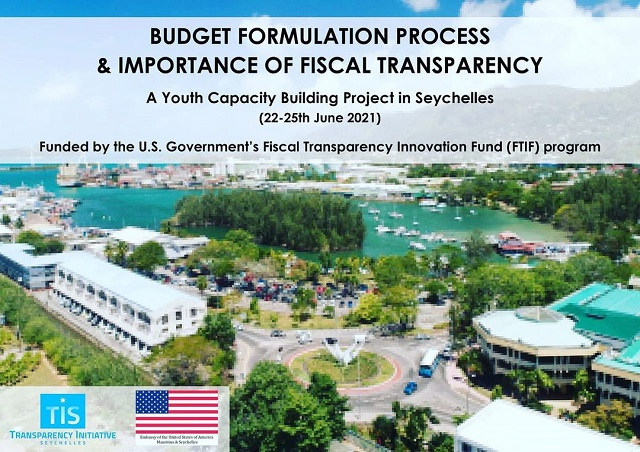 (Seychelles News Agency) - Around 25 young people from Seychelles are learning that they can influence the national government's budget -- and that their generation will be obligated to pay off government debts -- in a virtual four-day session that will end on Friday.

The session is being organised by the Transparency Initiatives Seychelles (TIS) and the U.S Embassy for Mauritius and Seychelles through a grant of $19,147 (SCR 316,000).

The project coordinator of Transparency Initiatives Seychelles, Marie-France Watson, told SNA on Thursday that the idea behind the session is to get the youth to understand the budget and the formulation process plus the role one has to play.

"People think that the budget is for the Ministry of Finance and the National Assembly and we have no say in it. We all have a say although we are not aware that we do. The sessions will outline how the budget is formulated and also how we, as citizens , can hold our leaders accountable to what is put in the budget," said Watson.

She said that the youth have a major role to play "given that the debt which the country incurs today, it's the children and the youth who tomorrow will pay for it. It is therefore important that they understand this."

In his opening remarks at the start of the symposium on Tuesday, the Finance, Economic Planning and Trade Minister Naadir Hassan, explained that the Seychelles government has "reformed its budget process by adopting performance-based budgeting. The reform is aimed at improving the efficiency and effectiveness of public sector management whilst enhancing accountability and transparency."

Watson said it is important for the youth to know that they can have an input into what goes in the budget.

"Youth needs to know they have a right to contact their Members in the National Assembly for example to ask questions when the budget is being formulated. They also have a right to lobby for a cause that they feel should be in the budget," added Watson.

She also added that Transparency Initiative Seychelles will be producing materials on citizens budget targeting the population at large, so that everyone gets a chance to understand the budget process and their role in it. This is an additional activity under the project.

Transparency Initiative Seychelles is a not-for-profit organisation launched in April 2017 to help fight against corruption and bribery. It is part of the global entity Transparency International.