Families wait for news of survivors after Florida building collapse 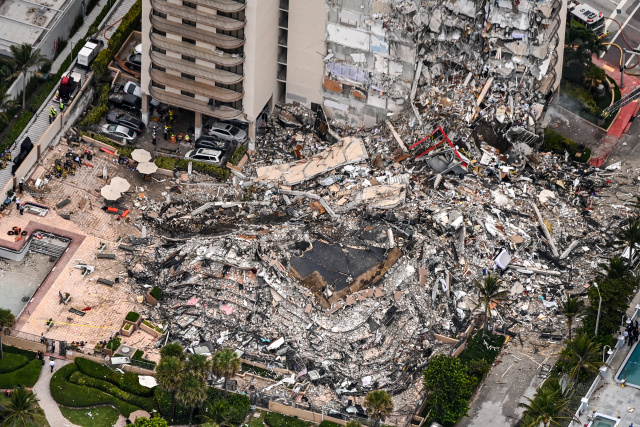 This aerial view, shows search and rescue personnel working on site after the partial collapse of the Champlain Towers South in Surfside, north of Miami Beach, on June 24, 2021. The multi-story apartment block in Florida partially collapsed early June 24, sparking a major emergency response. Surfside Mayor Charles Burkett told NBC’s Today show: “My police chief has told me that we transported two people to the hospital this morning at least and one has died. We treated ten people on the site.” (CHANDAN KHANNA / AFP)

(AFP) - Staring into space or sobbing, family members of those missing in the Florida apartment building collapse waited in anguish for news of loved ones, while others scrambled for a place to live after their home was destroyed.

The disaster in Surfside, near Miami Beach, left one person dead and 99 unaccounted for after the collapse early Thursday, with fears the toll may rise much higher.

"Everything is gone," said Erick de Moura, 40, who was at the town's community center trying to find temporary accommodation.

The Brazilian had lived for three years on the 10th floor of the oceanfront Champlain Towers South, part of which pancaked in the middle of the night for reasons yet unknown.

He survived because he had decided to stay at his girlfriend's house last night.

"I am homeless now. I lost my papers, documents, everything. My green card, my money," de Moura said.

"I just came back and the scene is shocking," he added. "There is a lot of pain. I'm blessed that I am alive."

As for his neighbors, "I think they're gone."

These residents had had the best view, overlooking the beach and ocean, until their part of the tower collapsed like a house of cards in the night.

Firefighters, police and search dogs spent the day trying to locate survivors in the rubble. A crane cleared away pieces of debris, while a helicopter patrolled from above.

The rest of the 12-story building was still standing, but all residents were evacuated and several surrounding streets cordoned off.

The survivors and families of those missing gathered a few blocks away at the community center, where volunteers were providing water, coffee, lunches, and clothes, as well as emotional support.

Displaced residents were trying to figure out where they can now live, whether it's with relatives or in hotels which have offered rooms. Others waited grimly for news of their loved ones.

People come and go. Some are seated and motionless, while others are sobbing.

More than a thousand people have passed through the community center, said Ron Ben Hayoun, a 22-year-old volunteer and north Miami resident who had returned to his childhood neighborhood to help.

In this city with a large Jewish community, "we try to help everyone, we are not exclusive."

"It's pretty shocking. people are very emotional," said the young man, who had recently returned from Israel where he did his military service.

General » Be a reporter: Write and send your article » Subscribe for news alert
Tags: US, accident