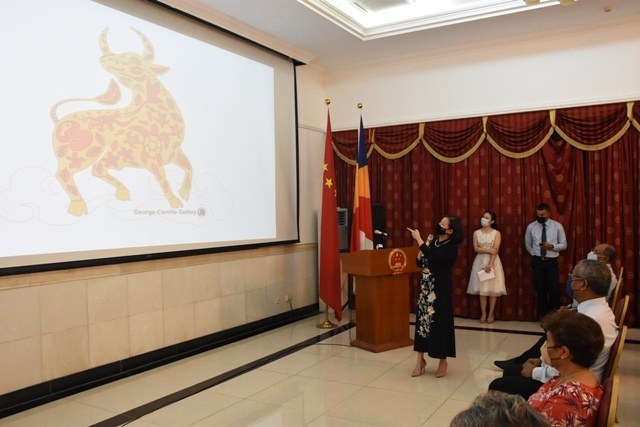 To mark the occasion, the Chinese Embassy in Seychelles hosted a reception on Friday evening at its headquarters in the central district of St Louis. (Seychelles Nation)

(Seychelles News Agency) - Seychelles and China have expressed their commitment to reinforce bilateral cooperation as they celebrate 45 years since the establishment of diplomatic relations.

To mark the occasion, the Chinese Embassy in Seychelles hosted a reception on Friday evening at its headquarters in the central district of St Louis to celebrate the partnership and to renew bilateral economic and commercial cooperation.

Speaking at the ceremony, the Chinese ambassador to Seychelles, Guo Wei, expressed her gratitude to Seychelles which she says has always paid close attention to China's development and supported the Seychelles-China friendship.

She also thanked Chinese associations and companies for their contribution to promoting the island nation's local economy and social development as well as friendly cooperation.

"Over the past 45 years, the two countries have always treated each other as equals and the bilateral relations have enjoyed a sound momentum of growth, setting a good example of sincere friendship, solidarity, cooperation, mutual benefit and win-win outcomes between countries," added Wei.

The President of Seychelles, Wavel Ramkalawan, top government officials and members of the diplomatic corps attended the event.

On behalf of the government of Seychelles, the Minister for Foreign Affairs and Tourism, Sylvestre Radegonde, described the relationship between China and Seychelles as a privileged and valued one that has "withstood the test of time because there is mutual trust and respect between us."

Radegonde said the relationship has been characterised by fruitful cooperation in a wide array of sectors and close people-to-people ties.

Seychelles was grateful for China's support and contribution to the socio-economic development and wellbeing and health of the Seychellois people, said the Minister.

"With the same willingness and vision, we have developed cooperation based on friendship, solidarity, without looking at the size of our territory or our population or the abundance of our riches," said Radegonde.

Since 1977, China has assisted Seychelles, an archipelago in the western Indian Ocean,  in various sectors, including education, agriculture, health, housing, and infrastructure as well as fisheries and environment.

China has built some landmark infrastructure in Seychelles including the parliament building, the Palais de Justice, housing projects, Anse Royale hospital. Still ongoing is a new headquarters for Seychelles Broadcasting Corporation, funded by the Chinese government.

Furthermore, over 1,600 Seychellois have undergone short or long training in Chinese institutions and nearly 200 on Chinese-government scholarships. A Chinese medical team and volunteers have also served in Seychelles for decades.

As for trade, Ambassador Guo Wei said that trade between the two countries has grown steadily over the past decades, reaching a record in 2019.

"It should be preserved, consolidated and strengthened because we share the same vision of a world built on universal values of friendship, solidarity, peace harmony between our people," said Radegonde.

On her side, the Chinese ambassador said that "standing at a new historical starting point, we are ready to join efforts with Seychelles to deepen political mutual trust, maintain close coordination on international and regional affairs, expand cooperation on green development, blue economy and people's livelihood, so as to take our relations to a new level and build a community with a shared future for both sides."

Diplomacy » Be a reporter: Write and send your article » Subscribe for news alert
Tags: Seychelles-China friendship