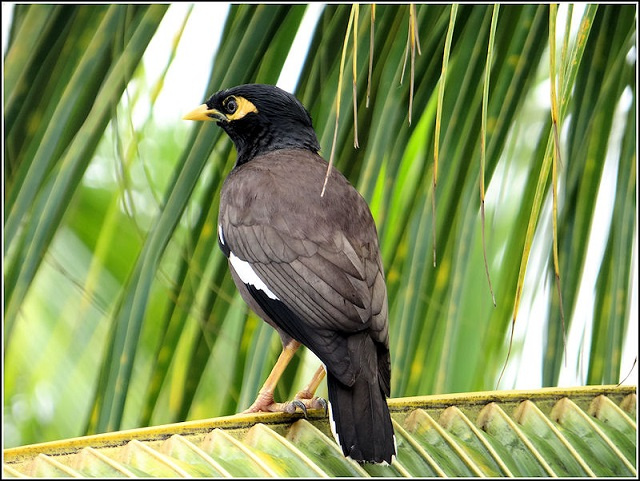 Mynas are on the International Union for Conservation of Nature's (IUCN) list of the world's worst invasive species. (Seychelles Islands Foundation)

(Seychelles News Agency) - An increase in the myna bird population in Praslin National Park represents a new threat to the population of the Seychelles' endemic black parrot, an officer from the Seychelles Islands Foundation warns.

The myna bird increase in the park was observed by the Vallee de Mai research team, and consequently SIF decided to conduct a survey to find out if the species have increased its range since the last survey in 2018.

The black parrot officer at SIF, Monica Griffith, told SNA that "we have found that the range has continued expanding and that the number of mynas detected have increased."

She explained that compared to the detection of one myna at each point in 2018, in the recent survey, up to four individuals were detected at each point.

A newsletter from SIF outlined that due to the rough and hazardous terrain that the team's observers have to navigate, the myna survey is one of the Vallée de Mai research team's toughest surveys. It required two staff to visit 23 points within the Praslin National Park and five points in the Fond Ferdinand reserve. Each point needs to be visited twice a day, in the early morning and late afternoon, when bird activity peaks.

"If the myna population expand further, they will potentially be competing with the black parrots for nest cavities. We have already recorded mynas nesting in known parrot nest tree cavities. It is expected that these mynas will be competing for food as they are generalist feeders with a broad diet," said Griffith.

"They are also capable of predating their eggs and chicks. Our survey findings suggest that black parrot eggs have already been lost to myna predation. As the black parrots are not evolved to evade predators, they are not skilled in defending their nests from attack," she added.

Mynas are on the International Union for Conservation of Nature's (IUCN) list of the world's worst invasive species. They are skilled at adapting to new locations or habitats and taking advantage of new situations. The species is also very territorial and aggressive creatures.

Griffith also outlined that the spread of the myna population may have even more serious impacts on other native fauna in the palm forest, for example geckos, chameleons and large invertebrates such as stick insects and spiders, which are eaten by mynas.

"In an ideal world, the mynas would be eradicated immediately. This would benefit not only the black parrots but all of the other bird species, as well as the endemic reptiles and invertebrates in Seychelles, which can be consumed by mynas. However, mynas are notoriously difficult to eradicate," said Griffith.

She explained that mynas are very smart and quick learners, which make them difficult to trap in large numbers. Furthermore, as there is a great abundance of mynas across the inner islands, it would be vital to eradicate mynas from all of the inner islands at the same time to prevent recolonisation.

SIF expects to discuss possible courses of action with the Ministry of Agriculture, Climate Change and Environment.