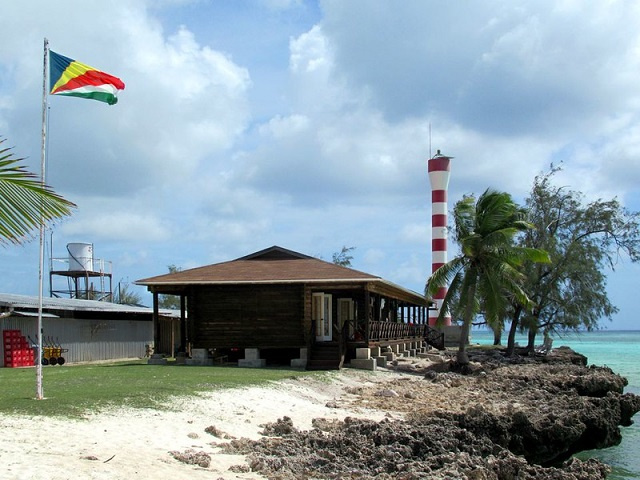 Fleischer-Dogley said the centre is one of the longest-running tropical research stations and that is the reason SIF wanted to give justice to that milestone. (David Stanley, Flickr) Photo License: CC BY 2.0

(Seychelles News Agency) - The Seychelles Islands Foundation is preparing to bury a time capsule on Aldabra to preseve a historic cache of items and information that will document the running and the operation of the atoll's research station as it is functioning currently.

The burial, which was scheduled for June 30, is one of numerous activities that will mark the 50th anniversary of the Aldabra Research Centre.

In his message of congratulation as the Patron of the Seychelles Islands Foundation, President Wavel Ramkalawan thanked "those who have helped us reach this proud milestone, those who are currently on Aldabra as well as those supporting the team from Praslin, Mahe and around the world."

"The station, the heart of the adventure to protect our natural heritage which we have given to the world, tells a powerful story that I hope will inspire future generations well beyond the next 50 years. My wish is that each and every Seychellois realises and understands that national and international cooperation can help us preserve our planet while ensuring the survival of sensitive species," said Ramkalawan.

She said the 50 items are still being selected but that they will be representative of what the station stands for and will each tell a story.The chief executive of SIF, Frauke Fleischer-Dogley, told the press during a virtual interview that the capsule will contain "the pledges of our staff and the organisation, as well as 50 specific items, that will be taken out again to remember our days."

"There will be both natural and manmade items in there to do with the running and the operation of the station. The most important part are the messages that will also go in there. Each of the staff who is at the station now will have a chance to write their own messages and sentiments at this point in time," said Fleischer-Dogley.

Information on SIF's monitoring schedules will also be placed in the time capsule.  Fleischer-Dogley explained that this is necessary beccause in 50 years, monitoring methods are definitely going to change and might be carried out remotely.

Aldabra Atoll, one of two UNESCO World Heritage sites in Seychelles, has been under the international conservation spotlight since the late 1960s. This was also a time when the British and United States governments considered developing the world's largest raised atoll as a military base.

Several scientists from the Royal Society supported by other scientific bodies such as the Smithsonian Institution, mounted a protest, gaining public support against the development known as the 'Aldabra Affair'.

The society managed to buy the lease to the atoll where they built a research station, which was completed in 1971. Eight years later, the responsibility for the protection of the atoll was given to the Seychelles Islands Foundation (SIF).

"With 50 years of running and being in operation, it is one of the longest-running tropical research stations and that is the reason why we believe we really have to give justice to that milestone. It is not only of international significance but also something that Seychelles should and can be very proud of," said Fleischer-Dogley.

Among other activities to mark the Golden Jubilee of the research station on Aldabra, the SIF team is looking to formalise its relationship with the University of Seychelles through the signing of a Memorandum of Understanding.

SIF will also be launching the Aldabra research station grant for young people which will also focus on capacity building in research as well as art and volunteering. This grant will be open for people between 18 and 30 years old.

"We have a nice following on social media platforms overall but we would like to beef that up in Seychelles and this is why we launched, together with Raffles, a social media contest which is only for locals and residents. Through the contest, we want to ensure that what the Aldabra station is doing is understood," said Fleischer-Dogley.

The SIF team is also working on launching an online donation platform so that work being done can be supported from any corner of the world.

Vallee de Mai, the other UNESCO World Heritage site in Seychelles managed by SIF, provides part of the revenue needed to run operations in the research centre on Aldabra. As such different activities will also be held at Vallee de Mai to mark the occasion to express appreciation to the visitors there.