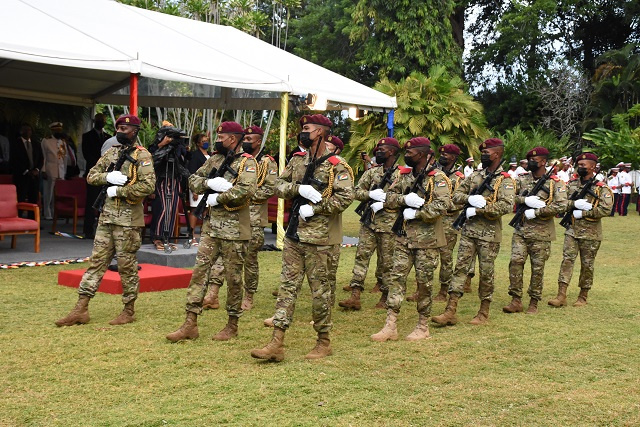 This year, a small military parade with only three platoons each having 15 members was held. (Seychelles Nation)

The celebration activities for Independence Day, which is also the National Day, took place in the gardens of State House.

Since 2015, June 29, which marks the day Seychelles gained independence from the United Kingdom in 1976, is celebrated as the National Day, and usually the highlight every year is a military parade at the Unity Stadium at Roche Caiman. This year, a small military parade with only three platoons each having 15 members was held.

In wishing Seychellois a happy Independence Day, Wavel Ramkalawan in his first address for the occasion as the President said, "Today we are gathering as a nation filled with pride. This pride like we say in English, it's about us as a nation."

"Forty-five years ago we had a lot of hope. We stood as a nation that was being born. Today 45 years later despite challenges, even the challenges that exceed us, we stand once again as a nation who has dreams for all its children," he said.

The head of state of Seychelles said that in the times when citizens are faced with difficulties, "we will do as our ancestors did. They supported each other and this is what has allowed us more than 250 years later to stand proud with qualified Seychellois in different areas."

He said that in the present day Seychelles "there is no place for discrimination and there is no space for hatred, but there is space for us to offer what is best in us and for us to always stand and help raise our flag  with great pride."

"Today here in the State House gardens, I want to pay homage to the first person who was called president, father of the nation Mr. James Mancham who received the independence with Great Britain. I recognise a Seychellois child who had good principles, who had love in his heart and who helped to lead our country."

Mancham was the first president of Seychelles, a group of 115 islands in the western Indian Ocean, and held office from 1976 to 1977. His reign as president was short-lived after he was overthrown by a coup d'état staged by late president Albert Rene in June 1977.

Ramkalawan also spoke about the direction that the new government is taking to relaunch the country's economy.

He said that Seychelles has throughout the years put a lot of effort into its tourism industry which is the top contributor to its economy and the COVID-19 pandemic heavily impacted that industry.

"We were in a desperate situation but we took decisions. If we had not vaccinated our people, today Seychelles would have been on its knees. Thanks to the vaccination we started in January, we were able to open our country and since then our economy has started to breathe. It has regained some stability," said Ramkalawan.

"The 29 June is the time to show our solidarity to our brothers and sisters and for us to assume our responsibility and help in the fight against the COVID-19... It is painful when we are placed on red lists when certain countries tell their citizens not to come to Seychelles but this does not depend on the government but on you and me," he added.

He said that the financial contribution received from both Seychellois and foreigners amounting to SCR 78 million has helped the country in the face of the pandemic and called on everyone who can contribute to the fund to do so.

Ramkalawan took the opportunity to send his condolences to the family of Maxime Ferrari who passed away on Tuesday in the early morning.

"I also want on this 29th June to pay homage to another Seychellois who was in the first cabinet of ministers who left us early today. I want to pay my homage to Dr. Maxime Ferrari one of the architects of our country. We thank him for all his contribution while we offer our sincere condolences to Minister Ferrari and his wife and his family members.

Ramkalawan concluded in saying, "Let us love our country, let us support each other and it is through this that we will change our country. In my heart every day I say long live Seychelles and long live the Seychellois people."

Seychelles to recognise acts of devotion, bravery and generosity with National Order of Merit award