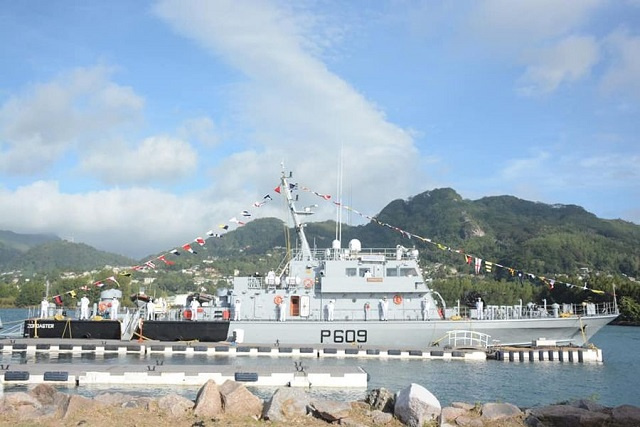 (Seychelles News Agency) - The ability of the Seychelles Coast Guard to combat maritime crimes has been given an added boost after a fast patrol vessel given by the Indian government was put into operation on Tuesday.

The vessel, PS Zoroaster, is a powerful, fuel-efficient platform designed to perform multi-purpose operations, such as patrolling, anti-smuggling, anti-poaching, and search and rescue. It can travel at a maximum speed of 34 knots with an endurance of more than 1,500 nautical miles.

The commissioning and formal operationalisation of the vessel was carried out in a ceremony to coincide with the island nation's Independence Day on Tuesday, June 29 at the Seychelles Coast Guard at Perseverance in the presence of President Wavel Ramkalawan.

The chief of the Seychelles People's Defence Forces (SPDF), Colonel Michael Rosette, said that the formal operationalisation of the vessel "comes at an opportune moment where the current administration under the leadership of President Ramkalawan is putting much emphasis on combating maritime crimes related to narcotic traffic and illegal unreported and unregulated (IUU) fishing amongst others."

Rosette added that "the new patrol ship with its added capabilities will no doubt contribute immensely in carrying out continuous patrols and policing our vast Exclusive Economic Zone. Safeguarding this vast expense of ocean space is vital for our country, which livelihood and existence are intricately tied to the maritime domain, and freedom of navigation."

The vessel which arrived in Seychelles, an archipelago in the western Indian Ocean, in March was officially handed by Prime Minister Narendra Modi to President Ramkalawan in a virtual ceremony in April.

On his side, the Acting Commander of the Seychelles Coast Guard, Lieutenant Colonel Jean Attala, said that "Patrol Ship Zoroaster is ready, the crew has been trained and they need to go out there and carry out their missions, and more importantly relieve other sister ships in the important task of safeguarding our sovereignty and support the Coast Guard in its various operations."

The new vessel, which costs $13,462,210, joins the two larger vessels, Patrol Ship Topaz and Patrol Ship Etoile, as the major offshore patrol ships of the Seychelles Coast Guard. As customary, in the naming of local patrol ships, Patrol Ship Zoroaster takes its name from a local fishing bank – the 'Zoroaster Shoal' located on the Mahe Plateau, some 70 nautical miles East of Mahe.