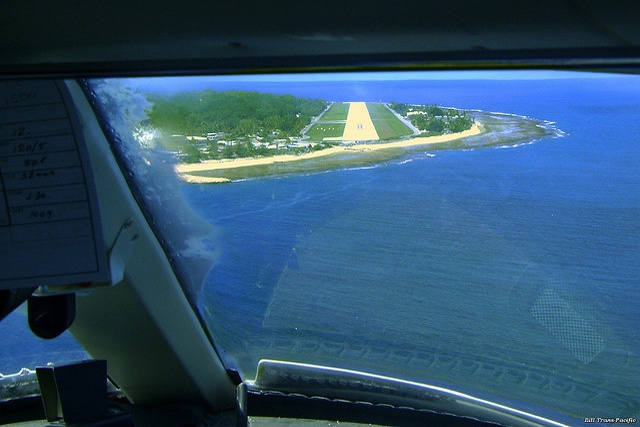 (Seychelles News Agency) - Small children frolic in the surf near a giant old phosphate conveyor, its rusted metal gantries twisted in a slow-motion state of collapse into the sea. This is Nauru, a tiny, circular South Pacific Island of under 10,000 people suffering the consequences of the poor decisions of its leaders, and fighting on the front lines of climate change.

The inner circle of the island resembles something of a lunar landscape in the dry months – the product of a hundred years of mining phosphate deposits directly out of the surface of the ground, leaving large pillars of limestone behind like stalagmites standing in a desolate landscape.

Now that the phosphate is all but mined out, and the ships no longer wait at the shore to be laden by the conveyors, what is left is a stark warning for all small island developing states: no natural resource lasts forever.

The phosphate is all but long gone, and the cash-strapped country, once with the second-richest GDP per capita, now brings in foreign exchange primarily through the sale of fishing licenses for its territorial waters and through the recent establishment of a detention centre to house 1,200 refugees from Cambodia who have applied for asylum in Australia some 4,500 km away.

Although the Nauruan government is heavily reliant on hosting the Australian detention facility, Nauru has received even more bad press, with NGO Save The Children reporting a spate of refugee children self-harming themselves after the Australian government announced that Cambodian refugees would be excluded from the reintroduction of temporary protection visas.

Earlier this week the Nauruan government warned that it would no longer be able to keep the country or its Australian detention centre running after a US-based hedge fund won the right to freeze the country’s bank accounts in Australia.

Firebird Global Master Fund is seeking the repayment of government bonds issued on the Japanese stock exchange in the 1980s, which the Nauruan government defaulted on. After a Japanese court ruled against Nauru in 2011, the amount went unpaid, allowing interest to almost double the original sum.

Now seeking a total of A$31m ($27m), Firebird went on to obtain a court order to freeze the nation’s bank accounts, leaving Nauru’s unable to pay its public servants or keep the electricity generators running.

Nauru managed to turn the tables on Firebird this Friday, with the New South Wales supreme court agreeing that the island nation’s Australian accounts were protected by sovereign immunity.

But this is not the end to Nauru’s financial woes, as Firebird still has a week to appeal the ruling and it seems that other unpaid creditors may also be circling overhead.

According to the United Nations’ Framework Convention on Climate Change, more than two-thirds of the island is uninhabitable as a result of strip mining and almost 40 percent of the marine life around the island has been decimated.

The people, too, pay a heavy price. Nauruans have been given the dubious honour of being the most obese people in the world: according to a 2010 study, a shocking 97 percent of men and 93 percent of women were overweight or obese.

Nauru also has the world's highest level of type 2 diabetes linked to this obesity, with more than 40 per cent of the population affected, owing to the lack of fresh produce and an abundance of cheap, unhealthy fried foods and imported sugary mass-produced snacks.

First called Pleasant Island by British sea captain John Fearn, who was the first Westerner to visit the island in 1798 in search of whales to hunt, the island is a forlorn shadow of what once was. It seems the islanders are all too aware that their international image, once a source of pride, is now one of defeat.

The island’s only hotel stands in ruins, not having been maintained since the 1980s, and the shells of homes, schools and factories serve as an unbearable reminder of the good times when Ferarris were once imported to the 21 square kilometer island and a fleet of Boeing 737 aircraft was bought to service the island’s tiny airstrip.

The Nauruan government, which established a trust fund from the proceeds of its phosphate mining, had over a billion Australian dollars by the 1980s, with which they bought planes, ships and international hotels.

But when the phosphate ran out soon afterwards, the island’s debts began to mount and much of the trust’s assets were sold.

Now, over 90 percent of the population is unemployed, and of the employed, over 95 percent are employed by the government, meaning the country has virtually no private sector.

A global voice on climate change

Nauru can be considered a terrifying harbinger of what could be for many small island developing states. Facing environmental devastation, economic disaster and a health crisis, the island is also on the front lines of the climate change war.

Situated in one of the deepest parts of the Pacific Ocean, and with the large majority of the population residing on the habitable outer rim of the island, the Nauruan people may become some of the first climate change refugees themselves if sea levels rise more than a metre by 2100, according to scientific projections.

Since Nauru was elected the chair of the U.N. Alliance of Small Island States (AOSIS) in 2011, Ambassador Marlene Moses has done her level best to caution the world about what her country has already experienced in the hope that they will heed the call to put a stop to global warming.

The warning is also particularly poignant for other small island states, which face similar challenges: scarce resources, lack of arable land, physical remoteness and the at times overwhelming temptation to sell out to big corporates and developed nations to solve financial difficulties at the cost of their natural environment or even their sovereignty.

The Seychelles, an Indian Ocean archipelago of 115 islands off the eastern coast of Africa is no stranger to these challenges, and after being plunged into a financial crisis brought about by crippling public debt levels and the global financial crisis in 2008, the nation brought in the IMF to assist with a debt restructuring economic reform programme.

Generally regarded as a good example of post-default reform, the economy of the Seychelles is gradually opening up, but the free market brings challenges of its own. Now flooded with cheap imported meat and processed foods, the islands face an obesity and diabetes epidemic of their own as fish and other healthy traditional foods fall by the wayside.

Drugs have also found their way into the Seychelles, as figures released in a study carried out by the Seychelles Ministry of Health in 2011 revealed a high number of heroin users in the country.

In a 2013 report, the United Nations claimed that Seychelles had one of the highest percentages of intravenous drug users in the world, although the percentage of heroin users is now estimated to have decreased by 20% this year, according to the Seychelles National Drug Enforcement Agency.

The Seychelles also stands on the brink of a possible oil and gas discovery. Several multinationals have bought exploration rights for areas of seabed within the 1.5 million square kilometre Exclusive Economic Zone (EEZ) of Seychelles.

Government officials are now in the process of formulating legal and institutional frameworks to ensure that the country would benefit as much as possible from any potential oil finds.

The Nauruan example, although tinged with despair and sorrow, is one that no small island state should forget: sustainability and care for the environment must be put above all else to safeguard future generations.