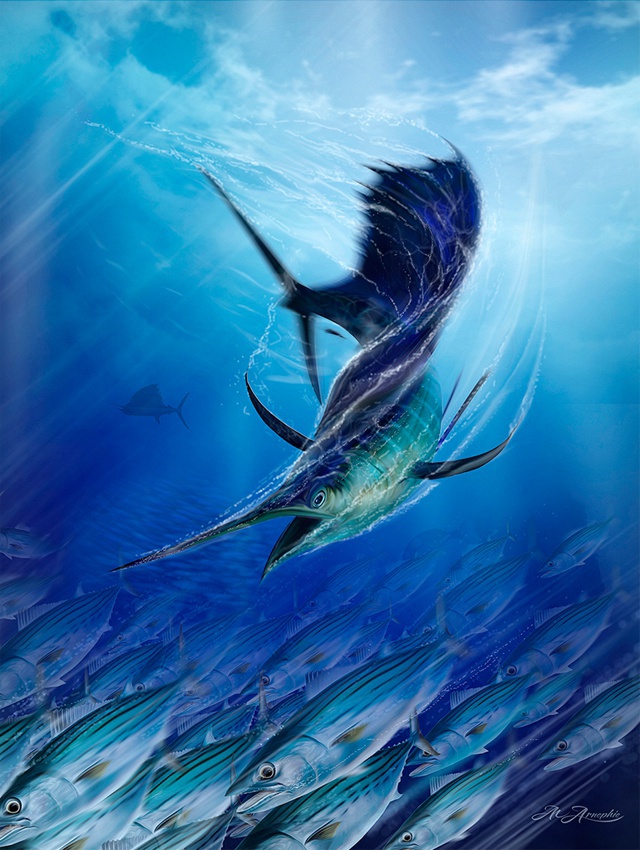 (Seychelles News Agency) - A painting by Seychellois artist, Micheal Bouchereau-Arnephie, which depicts a majestic sailfish cutting through crystal blue waters leaving trails of tiny bubbles in its wake, its long sharp bill pointing towards the school of mackerel it is chasing into the deep will feature in the December/January issue of Marlin Magazine.

Bouchereau-Arnephie is the proud winner of the "Reader's Choice" where readers and fans could vote for the favourite paintings by liking the entries on Marlin Magazine’s Facebook page.

The voting ended on September 30 and final results were published Friday evening.

The Seychellois artist emerged as the winner of the ‘Reader’s Choice’ ahead of 68 other talented artists who submitted their work for the Marlin Magazine’s 2015 Marlin Offshore Art Gallery competition.

According to the Secretary of the Seychelles Sports Fishing Club (SSFC), Grant Heyer, Bouchereau-Arnephie’s painting got 2836 votes for which were 350 votes more than his closest rival.

It is to be noted that the ‘Sailfish Mackerel Hunt’ chosen by the judges at Marlin Magazine to enter into the reader’s choice award was one of three artworks he had submitted for consideration.

“I knew that I was ahead by around 350 votes but it had to be confirmed by Marlin Magazine themselves,” Bouchereau-Arnephie told SNA in an interview.

In a previous interview Bouchereau Arnephie, also a keen sports fisherman, had told SNA that he was encouraged by Heyer, the secretary of SSFC’s of which he is also an executive committee member to submit an artwork for the competition.

“Obviously I feel very honoured and proud not just for myself but for SSFC and Seychelles in general. Its good exposure globally for Seychelles,” said the artist now that he is the proud winner.

Sharing Bouchereau-Arnephie’s success Heyer told SNA that SSFC is very excited now that Seychelles is home to the 2014 Marlin Magazine Reader's Choice Award adding that the sports fishing organization supports all efforts to help promote Seychelles in a positive way and to help get worldwide exposure for the Indian Ocean archipelago.

"Our hope is that as a result of this, some of those who voted have researched Seychelles further and come and visit on their holiday" said Heyer.

"We do feel there will be benefits to Seychelles in other sectors of the economy as a result of this - mainly increased exposure for potential tourist arrivals."

Marlin Magazine has an estimated readership of more than 400,000 people and an online subscribers of over 280,000 people.

There is a keen interest in deep sea fishing in Seychelles and it is hoped that the painting of the Seychellois artist in its December/January issue will give further boost to this type of fishing.

Hailing from Anse Boileau, in the west coast of the Seychelles main island of Mahé Bouchereau-Arnephie worked for a while as a freelance fashion designer in Melbourne, Australia.

Returning to Seychelles in 2001 he started his own company named Hi-Tech Graphics, working on branding for several well-known local brands.

Having won Marlin Magazine’s Readers Choice Boucherau-Arnephie is anticipating a future participation in the online competition.

“This particular competition is a yearly event by next year I might have a better one and more to show. Because of the subject matter,  Marlin Magazine is the perfect publication to associate my kind of art,” he said.