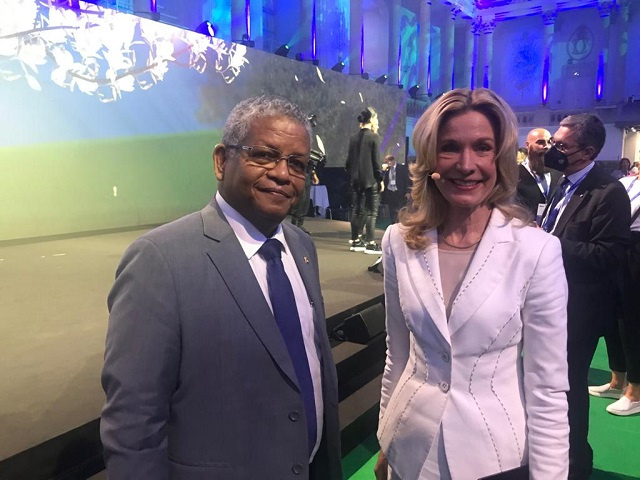 Ramkalawan who took part in the High-Level Forum on Thursday explained to host Melinda Crane that developing countries like Seychelles have contributed very little to global warming by industrialisation. (State House)

(Seychelles News Agency) - Seychelles' President Wavel Ramkalawan made a passionate plea to the developed world to help the global South grapple with the effects of climate change in his statement at the 5th edition of the Austria World Summit (AWS), State House said on Friday.

Ramkalawan, who took part in the High-Level Forum on Thursday, explained to host Melinda Crane that developing countries like Seychelles have contributed very little to global warming by way of industrialisation but are at the receiving end of climate change effects brought about by greenhouse gas emissions by developed countries.

He called on developed countries to help developing countries finance their efforts to combat climate change, adding that "there's got to be justice to help the countries that feel the brunt of climate change and pollution".

Ramkalawan gave the example of Seychelles, an archipelago in the western Indian Ocean, which has devoted 30 percent of its Economic Exclusive Zone to conservation. Seychelles together with Mauritius are protecting the Joint Management Zone whose seabed is covered with the largest swathe of seagrass in the world.

"We are small but we're playing our role ... the commitment is 100 percent but we want to see action and the time for action is now. Bring about the change," he said.

In his keynote address at the opening of the summit, Arnold Schwarzenegger, the event's founder and a well known actor and former governor of the U.S. state of California, said that communications on climate change need to be framed differently. He said the message must not be confusing and must inspire hope, adding that it must be focused on combatting pollution as this is the major pathway to climate change.

On the sidelines of the summit,  Ramkalawan held bilateral talks with Alok Sharma, the President of COP26 and gave an interview to the UK-based TV network Sky News.

Ramkalawan, who is heading a three-person delegation, will be back in Seychelles on July 5.