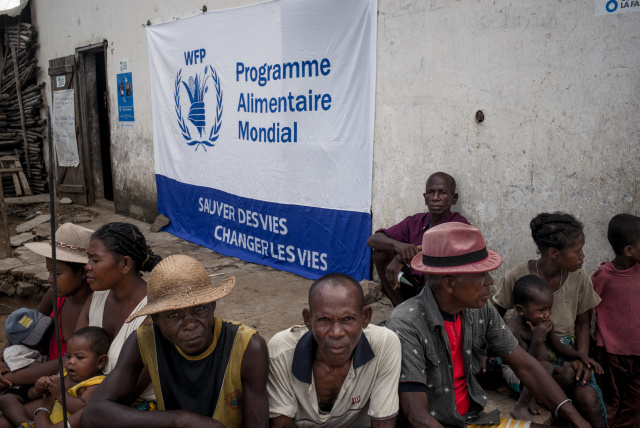 Residents of Ifotaka municipality participate in a programme to screen for malnutrition and distribute food supplements for infants, organised by the NGO Action Contre la Faim and the World Food Programme (WFP) in southrn Madagascar, on December 14, 2018. In the village of Ifotaka, at the southern tip of Madagascar, the noise and excitement of the country's election campaign seems far away as locals confront more pressing needs in a daily struggle for food. For several seasons now, the entire southern part of Madagascar has been caught up in a drought that has made water increasingly scarce, wrecking even efforts to grow rice -- the staple food. (RIJASOLO / AFP)

(AFP) - Reporters Without Borders (RSF) on Thursday denounced a "smear campaign" by the authorities in Madagascar against a journalist who works for several international media.

Gaelle Borgia, a Pulitzer Prize winner for an investigation into Russian interference in the 2018 Malagasy presidential election, "is the subject of a campaign designed to discredit her", according to a statement from the NGO on Thursday.

In a video posted on Facebook on June 21, the journalist showed people hit by devastating famine in the south of the island eating scraps of leather from zebu skin, normally used to make sandals.

In a statement days later, local authorities accused her of "spreading false information", "insulting the local culture" and using the misfortune of the people "to try to shine publicly".

State broadcaster TVM then featured the same people Borgia interviewed, only this time they said that they had been paid by the journalist to eat leather.

Borgia denied the accusation and went back to interview the people again. On camera, they told her they had been threatened by armed men wielding a knife and paid to make statements against her.

"We denounce in the strongest possible terms the crude and mendacious attempts to discredit the work of this journalist," RSF said.

Pressure, intimidation and threats against journalists have recently increased on the island, especially around issues such as Covid, RSF said. Madagascar has fallen three places in the world press freedom index published by RSF, and is now ranked 57th out of 180 countries.