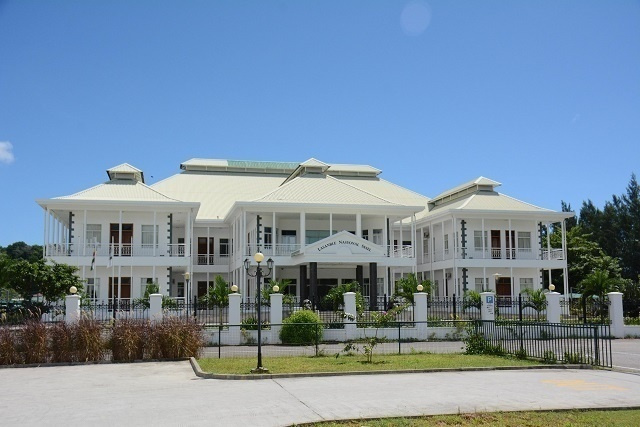 The motion was approved by the National Assembly with 27 votes in favour. (Seychelles Nation)

(Seychelles News Agency) - Seychelles is set to ratify the Treaty on the Prohibition of Nuclear Weapons after the National Assembly overwhelmingly approved a motion in support of the treaty, which has gained significant support among non-nuclear nations.

The Leader of Government Business, Bernard Georges, presented the motion last Wednesday and said the aim is to see nuclear weapons completely eliminated in the near future.

The Treaty was adopted on July 7, 2017, after two rounds of negotiations at the United Nations General Assembly. Both rounds were boycotted by all nuclear weapons possessing states, most NATO (North Atlantic Treaty Organization) countries, and many military allies of nuclear weapons states.

The former President of Seychelles, Danny Faure, signed the Treaty in September 2018 at the 73rd session of the United Nations General Assembly in New York. His Cabinet of Ministers approved for the ratification of the Treaty in June last year.

The chairman of the International Affairs Committee of the assembly, Waven William, said that Seychelles was among the countries taking part in the negotiations and was among 122 member states who signed it.

"The committee recognises that the countries that did not sign or ratify the Treaty will not be able to be controlled and sanctioned for their actions, which means that this Treaty will only become something symbolic and inferior towards this global effort," said William.

He added that Seychelles recognised this global effort and has rallied to get countries to ratify this treaty as soon as possible, as through such acts, the island nation in the western Indian Ocean, continues to show its support towards global goals.

The motion was approved by 27 votes in favour.

The treaty entered into force on January 22, 2021, after Honduras became the 50th country to ratify it.

Signatories to the treaty are barred from transferring or receiving nuclear weapons and other nuclear explosive devices, control over such weapons, or any assistance with activities prohibited under the Treaty.

In addition to the Treaty's prohibitions, States Parties are obligated to provide victim aid and help with environmental remediation efforts.

General » Be a reporter: Write and send your article » Subscribe for news alert
Tags: Treaty on the Prohibition of Nuclear Weapons, United Nations General Assembly