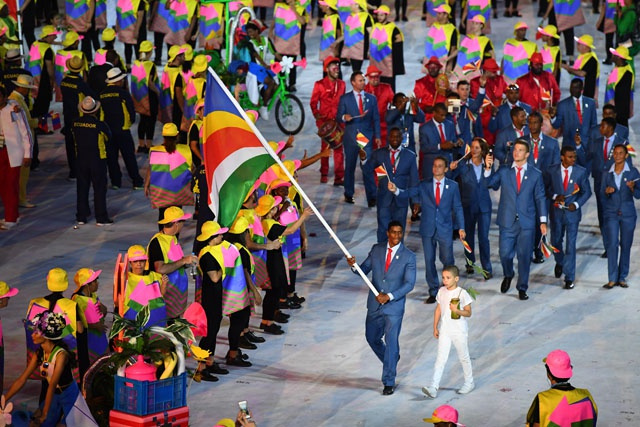 The Seychelles' team at the Olympic Games in Rio in 2016. (SOCGA)

(Seychelles News Agency) - Five athletes from Seychelles will participate in the upcoming Olympic Games in Tokyo, the Seychelles Olympic and Commonwealth Games Association.

Seychelles will be represented at the Games by Rodney Govinden in sailing, Felicity Passon and Simon Bachman in swimming, Ned Azemia in athletics and Naintaina Finesse in judo.

Govinden, who was the island nation's sportsman of the year in 2019, booked a place in the Games for the second time in October 2019 after winning a gold medal in the African Laser Championship in Algeria.

Passon ensured a place at the Games in February last year after she finished first in her heat for the 200m backstroke in 2 minutes 13.94 seconds Grand Prix swim meet in Durban, South Africa.

The three others have been invited as per their participation in various competitions.

The President of the Seychelles Olympic and Commonwealth Games Association (SOCGA), Antonio Gopal, told SNA on Monday that all member countries of the International Olympic Games are given the opportunity to take part.

"The International Olympic Committee has a system called universal unity which means that all member countries participate in the Games. So countries are given a number of spots for their athletes whether they qualified or not," said Gopal.

The events that the athletes will take part in are: sailor Rodney Govinden in Laser; Passon in women's 100m and 200m backstroke; Bachman in men's 200m butterfly in swimming; Azemia in 400m hurdles in athletics; and Finesse in judo in the category of men's 90 kg.

Four coaches will accompany the athletes to the Games, which start on July 23 among them are two international coaches, one each for sailing and swimming.

"When you have athletes training at high level you need coaches at the same level like Rodney who has done his training mostly abroad and lately with Viana Sailing, so his coach is from the same team. Felicity has trained to a very large extent with international coaches, so she needs a coach who understands her," said Gopal.

On the possible impact that the COVID-19 since athletes have not been able to compete at high level due to restrictions by host countries and on travel Gopal said that "Olympic Games is a very high level competition. It will be difficult for us to win medals without a good preparation."

"Rodney and Felicity they are two promising athletes but we expect them to perform to their best in a few years' time. We have discussed with the sports minister about an Olympic preparation programme that will give us the best chance to win an Olympic medal. But this we will have to work on in the coming years," he added.

Seychelles, an archipelago in the western Indian Ocean, has been a member of the International Olympic Committee since 1979.

The island nation has participated in the Olympic Games since 1980, missing only the 1988 edition. The nation has not yet won an Olympic medal.