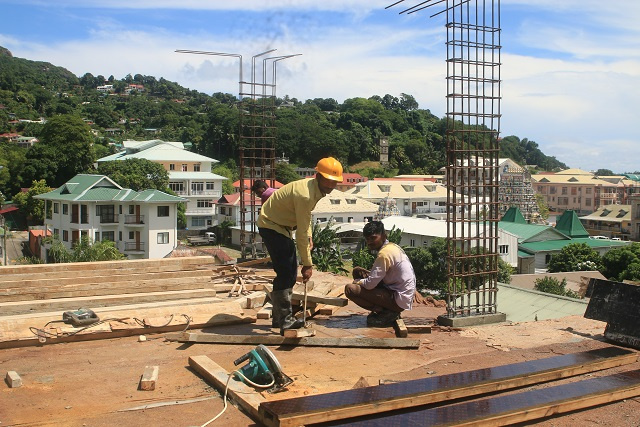 Seychelles has many migrant workers from mainly Asian countries such as India, Bangladesh, Sri Lanka and the Philippines and mostly work in construction. (Joe Laurence)

(Seychelles News Agency) - Seychelles will test the functionality of its national anti-trafficking in persons legislation in the coming days through a simulation exercise.

The exercise is taking place at the Regional Fusion Centre and Law Enforcement Safety and Security (REFLECS 3) base at Bois de Rose on the outskirt of Victoria, the capital

The United Nations Office on Drugs and Crime (UNODC) is coordinating the exercise following the government's request for training to strengthen the coordination between partners in the criminal justice system on matters of trafficking in persons.

The head of transnational organised crime, illicit trafficking and terrorism programmes at the UNODC, Johan Kruger, who has been working with Seychelles for 15 years, is the facilitator.

The Principal Secretary for Social Affairs, who is also the chairperson of Seychelles' National Coordinating Committee against Trafficking in Persons, Linda Williams-Melanie, said that while trafficking in persons is a crime that is often thought of as foreign, in an increasingly interconnected world, the archipelago does not and cannot remain isolated from the world's problems.

"With our permeable shores, high influx of tourists, and significant migrant population to support our economic development, we must not underestimate the risk and potential for this crime to fester in our country, as a source, transit or destination for victims of human trafficking. We must recognise the risk of an increased possibility of child sex trafficking through the social media that has become a lucrative source of attracting unsuspecting child victims," she said.

William-Melanie explained that the exercise was important not only in identifying the gaps in the legislation but also in identifying potential areas of enhancing national coordination and cooperation on identifying, investigating and prosecuting TIP cases.

"It will provide participants the opportunity to share experiences, sharpen skills and enrich knowledge and assess current operating procedures especially in investigation and prosecution of TIP perpetrators," she said.

At the end of the three-day exercise, representatives from the Police Department's immigration services and the Attorney General's office will make concrete proposals as to how to improve the legislation, which in turn will improve the country's rating on the U.S. State Department watch-list.

Seychelles was upgraded from Tier 2 Watch List to Tier 2 on the United States Trafficking in Persons Report for 2019, in recognition of the island nation's efforts to combat trafficking.

In February, the island nation in the western Indian Ocean convicted a second person for trafficking in persons when the Supreme courts found Israel Labrosse of Anse Aux Pins guilty of defrauding three foreign nationals and forced them into labour.

The first case was in 2018, when the Supreme Court sentenced a Bangladeshi national, Faisal Alam, to three years in prison for human trafficking.

General » Be a reporter: Write and send your article » Subscribe for news alert
Tags: Regional Fusion Centre and Law Enforcement Safety and Security, United Nations Office on Drugs and Crime