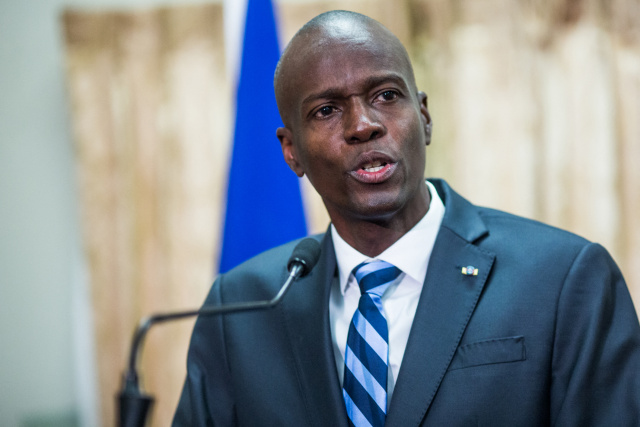 (FILES) In this file photo former Haitian President Jovenel Moise speaks at the swearing in ceremony for Prime Minister Jack Guy Lafontant at the National Palace in Port-au-Prince on February 24, 2017. The assassins on July 7, 2021 of Haiti's president were "professional" mercenaries who disguised themselves as US agents and may have already left the country, Haiti's ambassador to the United States said. "It was a well-orchestrated attack and those were professionals," Ambassador Bocchit Edmond told reporters. "We have a video and we believe that those are mercenaries." (Pierre Michel Jean / AFP)

(AFP) - A 28-member hit squad made up of Americans and Colombians assassinated President Jovenel Moise, Haitian police said Thursday, adding that eight were still at large as the country lurched into political chaos.

One day after Moise was killed and his wife Martine wounded by gunmen in their Port-au-Prince home, the poorest country in the Americas has no president or working parliament and two men claiming to be in charge as prime minister.

Police paraded some of the suspects before the media Thursday, along with Colombian passports and weapons they had seized. The head of the Haiti's National Police, Leon Charles, vowed to track the other eight down.

"It was a team of 28 assailants, 26 of whom were Colombian, who carried out the operation to assassinate the president," Charles said at the press conference in Port-au-Prince.

"We have arrested 15 Colombians and the two Americans of Haitian origin. Three Colombians have been killed while eight others are on the loose."

Previously authorities had said four of the suspects had been killed. Charles did not explain the discrepancy.

Taiwan confirmed late Thursday that 11 of the suspects were arrested on its embassy grounds, after security discovered a group of armed men had broken into the courtyard of the property that had been shuttered "for safety reasons" after Moise's murder.

The embassy gave permission to Haitian police to enter the grounds, said Joanne Ou, a spokeswoman for Taiwan's Ministry of Foreign Affairs.

"The process went smoothly," Taiwan's embassy in Port-au-Prince said in a statement, describing Moise's assassination as "cruel and barbaric."

Colombia's defense minister Diego Molano said at least six members of the hit squad appeared to be Colombian ex-soldiers, and that he had ordered the army and police to help with the investigation.

In Port-au-Prince, shops, banks and gas stations were closed, as questions swirled over who killed the president and why -- and why his security detail had failed to protect him.

The border with neighboring Dominican Republic -- the two share the island of Hispaniola - was closed.

Haiti's main airport was also closed, but due to reopen on Friday.

Authorities have not confirmed the identities of the two Americans of Haitian origin. Officials have said the killers spoke English and Spanish.

The US State Department said it could not confirm that any US citizen was arrested.

Haiti's ambassador to Washington, Bocchit Edmond, has said the killers were "professional" mercenaries disguised as US Drug Enforcement Administration agents.

Haiti has requested US assistance in its investigation, according to State Department spokesman Ned Price.

"We are aware of a Haitian National Police request for investigative assistance and the United States is responding," Price told reporters.

- Where was his security? -

Haiti is observing two weeks of mourning for the death of Moise.

"Jovenel Moise was not terribly popular, but he was the president. He cannot be killed as if he were just an ordinary citizen," said a 55-year-old man in Port-au-Prince, who gave his name only as Paul.

A 28-year-old woman named Julia said she was wary of police claims that foreign mercenaries killed the president.

"Where were the well-equipped police who watch over the president night and day? Why didn't they react?" she asked.

Prosecutors have the same question.

"I have given (police) the power to interview all the security agents close to President Jovenel Moise," said Port-au-Prince government commissioner Bed-Ford Claude on Thursday.

"If you are responsible for the security of the president, where were you? What did you do to avoid this fate for the president?" Claude said.

Interim Prime Minister Claude Joseph has declared a national "state of siege" and said he was now in charge.

Joseph has only been in his post as prime minister for three months, and was due to step down within days after Moise named a replacement on Monday.

"Does a country have several prime ministers?" asked Henry.

The unpopular Moise had ruled Haiti by decree after legislative elections due in 2018 were delayed.

As well as presidential, legislative and local elections, Haiti was due to hold a constitutional referendum in September.

Moise, a successful businessman, campaigned for power as a populist and was sworn in on February 2017.

The end date of his mandate became the source of a standoff, as Moise maintained that his term of office ran until February 7, 2022, but others said it ended on February 7, 2021.

The disagreement arose after Moise was elected in a 2015 vote that was canceled for fraud, and then re-elected in November 2016.

Without a parliament, the country fell further into crisis in 2020.

General » Be a reporter: Write and send your article » Subscribe for news alert
Tags: Haiti, politics