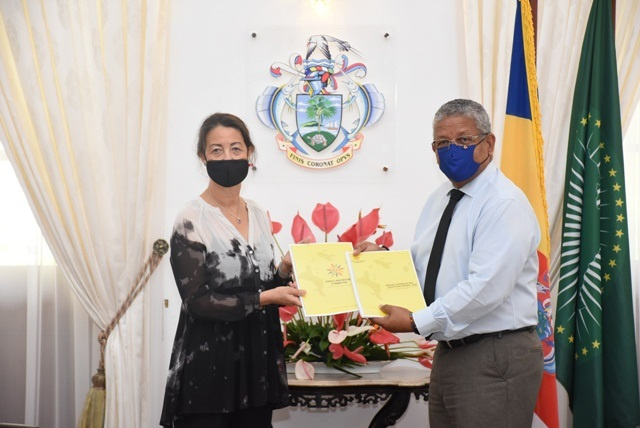 The Committee, which is chaired by former Chief Justice Mathilda Twomey, presented its report and a copy of the proposed sexual offence bill to President Wavel Ramkalawan on Friday. (Seychelles Nation)

The new laws would also make it mandatory for anyone who knows of or witnesses an act of sexual assault to report it to the authorities.

The Committee, which is chaired by former Chief Justice Mathilda Twomey, presented its report and a copy of the proposed sexual offence bill to President Wavel Ramkalawan.

"The President told us that he wants us to continue our work as it is not enough," Twomey told reporters. "The important thing now is to get this report and proposed law to everyone concerned including the public, where we can also take on board their suggestions," she said.

The proposed new laws address numerous issues, which include differentiating the crime of rape from that of sexual assault. The Committee has proposed a maximum sentence of life imprisonment for rape.

"We saw the need to show a clear distinction between the various offences which constitute sexual assault, while we have also looked at the things that are not present in today's laws, such as sexual grooming, sexual harassment and the distribution of sexually explicit materials involving children," said Twomey.

The proposed laws have also made it mandatory for anyone who knows or witnesses acts of sexual assault to report it to the authorities; a failure to do so would also be a criminal offence.

"As a committee, we looked at what was best for our children. We also want all Seychellois to understand what is normal and not normal where it concerns our behavior towards children, as over time a lot of these behavior has gained acceptance and that is something that must change," said Twomey.

The proposed law also includes offences such as catcalling, flashing, blackmail as well as sexual communication with children through social media or other digital platforms.

The next step for the proposed law will be to get the approval of the Cabinet of Ministers, before being presented to the National Assembly.

The Committee, set up by former President Danny Faure in June last year, was mandated to review the existing legal framework applicable to children. Its mandate included making recommendations for legal reform to enhance the legal protections afforded to children in line with Seychelles' constitutional and international law obligations and international best practice.

This was shortly after the Supreme Court had delivered judgment in a case where three men were sentenced to various terms for a number of sexual offences against 75 young girls over some time.

The Committee is comprised of the Attorney General, the Police Commissioner, and the Principal Secretary for social affairs as well representative from the health department, the ministry of education and civil society.