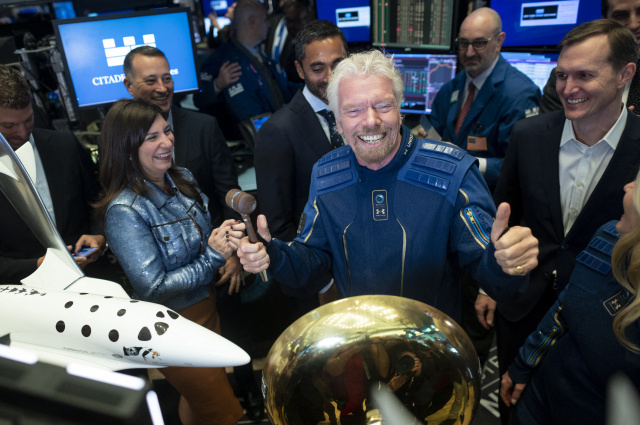 (FILES) In this file photo taken on October 28, 2019 Richard Branson, Founder of Virgin Galactic (C) poses next to George T. Whitesides (R), CEO of Virgin Galactic Holdings after ringing the First Trade Bell to commemorate the company's first day of trading on the New York Stock Exchange (NYSE) in New York City. He's always dreamed of it, and in 2004 founded his own company to make it happen. On July 11, 2021, billionaire Richard Branson will take off from a base in New Mexico aboard a Virgin Galactic vessel bound for the edge of space. The Briton is hoping to finally get the nascent space tourism industry off the ground -- but also go one up on Jeff Bezos by winning the race to be the first person to cross the final frontier in a ship built by their own company. (Patrick T. FALLON / AFP)

Virgin Galactic -- founded by flamboyant British billionaire Richard Branson -- is planning for a July 11 space flight. Blue Origin -- started by Jeff Bezos of Amazon fame -- is set to blast off on July 20.

The two companies will serve the nascent market for suborbital flights lasting just a few minutes, long enough for passengers to experience weightlessness and view the contour of the planet.

But that's where their similarity ends.

Branson, who heads the Virgin Group conglomerate that includes everything from entertainment to financial services to telecoms, founded Virgin Galactic in 2004. The 70-year-old's previous daredevil exploits include crossing the Pacific in a hot-air balloon and navigating the English Channel in an amphibious vehicle.

Bezos is 57 years old and the world's richest man. A science fiction fan, he founded Blue Origin in 2000 and recently stepped down as Amazon CEO to focus on space projects and other endeavors.

The spacecraft developed by the two companies could not be more different.

Virgin Galactic's spacecraft is not a classic rocket. It's attached to the belly of a large carrier airplane that takes off from a runway.

After an hour it reaches an altitude high enough to release the smaller spacecraft, the VSS Unity, that in turn fires its engines and reaches suborbital space -- where passengers float weightlessly for a few minutes -- then glides back to earth.

The spacecraft can accommodate two pilots and up to six passengers. The cabin has 12 large windows and 16 cameras.

Blue Origin in contrast is more of a classic rocket experience, with a vertical blast-off that accelerates to more than Mach 3, or three times the force of Earth's gravity.

Once it reaches the proper altitude, a capsule separates from the booster and then spends four minutes at an altitude exceeding 60 miles (100 kilometers), during which time those on board experience weightlessness and can observe the curvature of Earth.

The booster lands autonomously on a pad two miles from the launch site, and the capsule floats back to the surface with three large parachutes that slow it down to about a mile per hour when it lands.

The capsule has six seats and six large windows.

Virgin Galactic plans to start regular commercial operations in early 2022, and is aiming to carry out 400 flights per year from Spaceport America, its base in New Mexico.

Some 600 tickets have already been sold, including to Hollywood celebrities, for prices ranging between $200,000 and $250,000. Tickets are expected to be even more expensive when they go on sale to the public.

Blue Origin has yet to announce ticket prices or a date for the start of commercial operations. But a seat for the July 20 flight was sold an auction -- and the mysterious winner paid $28 million.

General » Be a reporter: Write and send your article » Subscribe for news alert
Tags: space, US, VirginGalactic