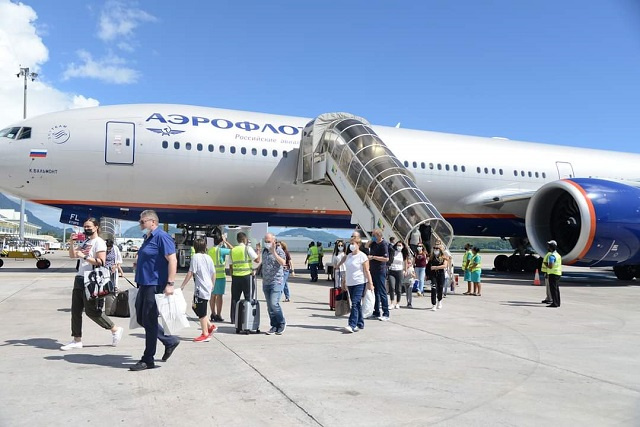 The surge in visitors from Russia is credited to the return Aeroflot absent from with twice weekly flights in April which were increased to three times a week. (Seychelles Tourism Board)

(Seychelles News Agency) - Seychelles saw a six-fold growth in visitor arrivals from the first quarter to the second, a surge that a top government official called encouraging.

According to figures published by the National Bureau of Statistics this week, 43,659 visitors arrived in Seychelles during the second quarter of 2021, compared with 6,785 in the first quarter.

This means that from January to June 2021, Seychelles welcomed over 50,000 visitors to its shores.

The surge in visitors from Russia is credited to the return Aeroflot absent from with twice weekly flights in April which were increased to three times a week. Emirates, the first airline back to Seychelles when the airport reopened, has boosted arrivals from the UAE while accelerating connectivity to its widening network.

Sherin Francis, Principal Secretary for Tourism, told SNA on Friday that the tourism industry has come a long way.

Seychelles opened its border to visitors in March to relaunch its tourism sector, which was severely affected by the downturn in travel due to the COVID-19 pandemic.

"Our industry has known difficult times in 2020 when the airport was closed. From zero visitors to about 500 per day, the progressive growth in the arrival numbers is encouraging for the tourism partners," said Francis.

Traditionally, the Seychelles' main markets for visitors were from Europe with Germany, France, UK and North Ireland bringing in the highest number of tourists for the last five years. Many visitors also came from the United Arab Emirates and India.

"We are confident that the numbers will keep growing as we work persistently with our partners in all markets to keep our destination visible and attractive. We are also grateful to our airline partners who have remained faithful to our destination," said Francis.

She added that with "Edelweiss' return in July, the increase in frequency from Qatar Airways, the arrival of Air France and Condor expected in October and the numerous charters, we are helping keep the Seychelles destination accessible to travellers."

Tourism » Be a reporter: Write and send your article » Subscribe for news alert
Tags: National Bureau of Statistics, COVID-19 pandemic