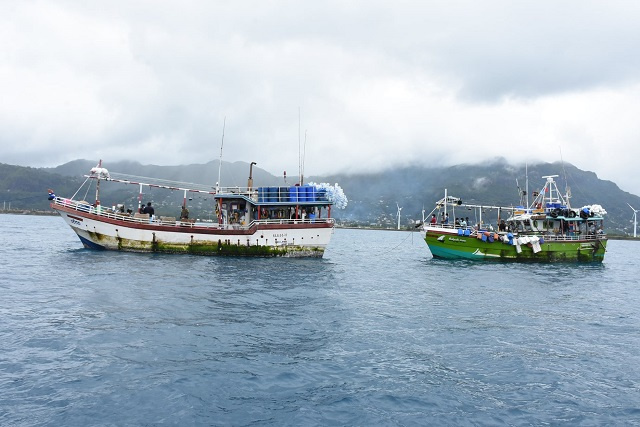 The latest two vessels intercepted on June 23 in a coordinated operation. (Seychelles Nation)

Johnny Louys, manager of control and surveillance in the Seychelles Fishing Authority (SFA), said six vessels registered in Sri Lanka or with Sri Lankan crew were caught in Seychelles over the last year. He was responding to a question from Philip Arrissol, Member of the National Assembly for the southern district of Anse Boileau.

“Among the six vessels, two have already been convicted, one was released as there was insufficient evidence for prosecution and three are still in court. For the court cases of the three vessels, one of the captains has been charged for illegal fishing while investigation is ongoing for the others and their crew are in remand,” said Louys.

He added that based on information gathered by different agencies both local and international and from local fishermen there is a strong possibility that more vessels are fishing illegally in the Seychelles’ waters.

On his side, the Minister for Fisheries, Jean-Francois Ferrari, told the National Assembly that when it comes to surveillance of its maritime territory, Seychelles has good cooperation from both local and international partners but that is not enough.

“We all know that even if we have good structures, they do not work alone. For us to protect our seas we need a government that has the political will to deal with the threats. This is difficult because sometimes the threats include the guilty parties from other countries often those we have good relations with,” said Ferrari.

He added that prevention work is also being done at a bilateral level and “recently I have informed the Sri Lankan High Commissioner that actions can be severe and destroying the boats are being considered and will be done if those citizens continue to fish illegally in our waters.”

Meanwhile, the Seychelles’ government will continue to invest in modern equipment for surveillance and crime detection and find ways to compensate local fishermen who are providing information on illegal activities at sea, said the Minister.

“The Fishing Department and SFA are working on clear guidelines to compensate fishermen who report to the authorities when they see foreign vessels doing suspicious activities in our waters. In the Ministry, we are encouraging our fishermen and those who use our marine resources to themselves become guardians of those resources,” said Ferrari.

Seychelles, an archipelago in the western Indian Ocean, is also reviewing the existing fishing regulation.

“We are doing a legal review updating our fishing regulations and through this, we will update all provisions that we’ve noticed have loopholes and legal gaps. This will include regulating recreational fishing in which unsustainable methods are used; and foreigners who are fishing not only for their own consumption but also doing it commercially. Very soon, we will submit a proposition to amend the fishing regulation,” said Louys.