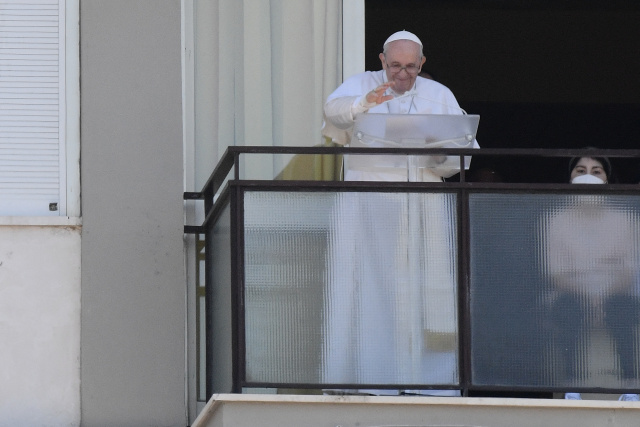 Pope Francis leads the Sunday's Angelus prayer from the Gemelli Hospital, in Rome, on July 11, 2021, where he is recovering from colon surgery. Pope Francis has had "satisfactory blood tests" as he recuperates from colon surgery and is gradually starting to work again, according to the daily bulletin from his spokesman on July 10, 2021. The 84-year-old pontiff underwent a scheduled surgery on his colon on Sunday and is recuperating at Rome's Gemelli hospital. (Filippo MONTEFORTE / AFP)

(AFP) - Pope Francis, 84, continues to recover and will return home "as soon as possible" from hospital following surgery on his colon, the Vatican said on Tuesday.

"The Holy Father is continuing his planned treatment and rehabilitation, which will allow him to return to the Vatican as soon as possible," spokesman Matteo Bruni said.

The pope was admitted to Rome's Gemelli hospital on July 4 after suffering from a type of diverticulitis, an inflammation of pockets that develop in the lining of the intestine.

The Vatican initially said he would be in hospital for about a week, and the pope led the Angelus prayer from his hospital window on Sunday.

On Monday, Bruni said he would stay for a "few more days".

"Among the many patients he (the pope) has met during these days, he addressed a special thought to those who are bedridden and cannot return home," Bruni said on Tuesday.

Francis is in the same suite used by Pope John Paul II, who also lead the Angelus prayer from there.

The Argentine pontiff temporarily ran a fever last week but a chest and abdomen scan and other tests revealed no particular abnormalities.