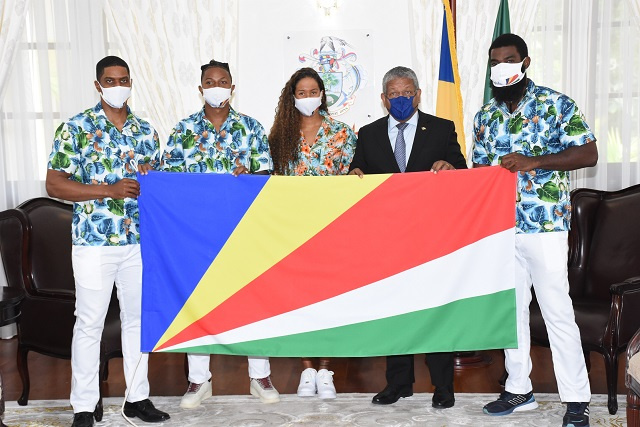 In a special ceremony Tuesday, four of the athletes met with President Wavel Ramkalawan. (Seychelles Nation)

(Seychelles News Agency) - Seychelles' Olympians received a special send-off at State House on Tuesday before heading to the Olympic Games in Tokyo next week.

In a special ceremony Tuesday, four of the athletes met with President Wavel Ramkalawan and the Minister for Sport, Marie-Celine Zialor. Bachmann was absent.

The Seychelles' delegation at the Games will leave the country on Sunday July 18.

There will be two flag-bearers for Seychelles, an archipelago in the western Indian Ocean: Govinden and Passon.

According to the Seychelles Olympic and Commonwealth Games Association (SOCGA) this in line with the International Olympic Committee's (IOC) aim to have a balanced representation of males and females at the Games.

The IOC is aiming to have an equal number of female and male athletes at the next Olympic Games in Paris, the capital of France in 2025.

Govinden who is the reigning sportsman of the year, said being a flag bearer is a huge honour and he expects the team to go out and do their best.

"My goal is to definitely improve on my performance at the last Olympics and although it has been a difficult year, I think I can do it" said Govinden, who has been training intensively in Portugal since 2018.

Passon, the Sportswoman of the year, said that despite being a small team, she believes team Seychelles will give their all in Tokyo.

"I just want to enjoy and learn from the experience as I look to give my best especially with the difficult year that we had. Training has been difficult, but now just have to look forward and try to perform," she said.

This year's Seychelles team of five athletes is the smallest group the island nation has ever sent to the Olympic Games. It is half the number of athletes that went to the 2016 Olympic Games in Rio de Janeiro, Brazil.

The President of the SOCGA, Antonio Gopal said, "The athletes are looking forward to attending the games, even though there are concerns. The chance to compete in an Olympic game is very special, so the athletes want to compete and we are confident that measures in place will ensure things work out well."

Seychelles first participated at the Olympic Games in 1980 and has sent athletes to compete in most Summer Olympic Games since then, missing only the 1988 Games. To date no Seychellois athlete has ever won a medal at the Games.

"The President has told us that now we need to work together with the Ministry for Sports, to come up with a long-term plan to get Seychelles a medal at the Olympic Games," said Gopal.

He said that this will not be possible this year with the impediment to participating in competition due to restrictions on travel amid the COVID-19 pandemic.

"Maybe in four years, but with the programme we want to come up with, it can be achieved in eight years, especially in combat sports," said Gopal.

The Tokyo Olympic Games will be the 32nd edition of the Games, in which around 206 are expected to compete in various events.

There has been a lot of concerns with regards to the hosting of the games, with Tokyo recently declaring a state of emergency, with fans barred from all venues, in a bid to limit the spread of COVID-19.