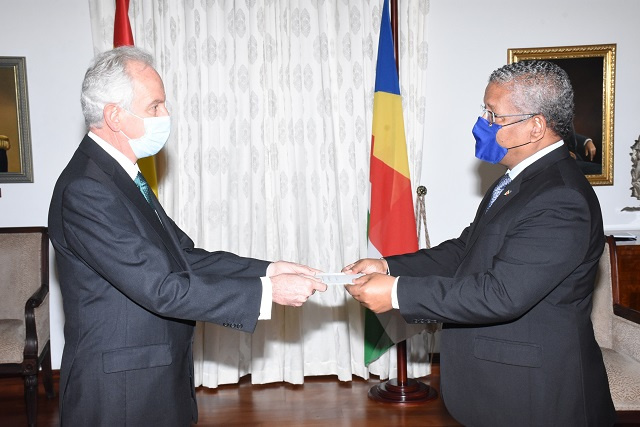 (Seychelles News Agency) - The health, social and financial sectors are areas that Seychelles and Spain have identified as having potential for further cooperation while fisheries and maritime security remain top priorities.

The newly accredited Spanish ambassador to Seychelles, Manuel Palma, spoke after he presented his credentials to President Wavel Ramkalawan at State House, Victoria, on Tuesday.

Palma outlined that both countries agree that there is a need to expand the relationship between Seychelles and Spain and "to try to enhance and promote relations in many fields of cooperation as we think there is space for improvement."

"We are cooperating in the fisheries sector through the agreement between the European Union (EU) and Seychelles. This allows Spain to fish in the Indian Ocean and by doing so, supporting Seychelles' economy in this sector. We are trying to develop that cooperation as much as possible for the next coming years. We are also looking into new sectors where we think we could have important cooperation with Seychelles," said Palma.

He added that Spain will continue to actively support and participate in maritime security cooperation, especially when it comes to the European Union Naval Force (EU NAVFOR).

"As you know we participate directly in the EU NAVFOR operations. We have a naval ship in the area and we have been there for the last 13 years. This is an operation that has had a lot of success and our intention is to remain present in this operation as long as it exists. Recently, the EU decided to extend the scope of the operation to fight other kinds of illegal trafficking in the area," he continued.

Since the launch of the operation in 2008, EU NAVFOR has been mandated to fight against piracy at sea off the Horn of Africa and in the Western Indian Ocean. This mandate has been extended to include monitoring of fisheries activities, monitoring of arms and drug trafficking, and monitoring of illegal, unreported and unregulated (IUU) fishing among other missions.

In January this year, the mandate of the EU NAVFOR has been prolonged another two years, until December 2022.

During his stay in Seychelles, Palma will also be paying a visit to the Speaker of the National Assembly, Designated Minister, Minister for Finance, Economic Planning and Trade, Minister for Foreign Affairs and Tourism, Minister for Health, the Chief of Defence Forces and the Ambassador of Cuba and Dean of Diplomatic Corps.

Seychelles and Spain established diplomatic relations on November 3, 1978, and Palma is the 15th Spanish Ambassador to be accredited to Seychelles. He will be based in Addis Ababa, Ethiopia.