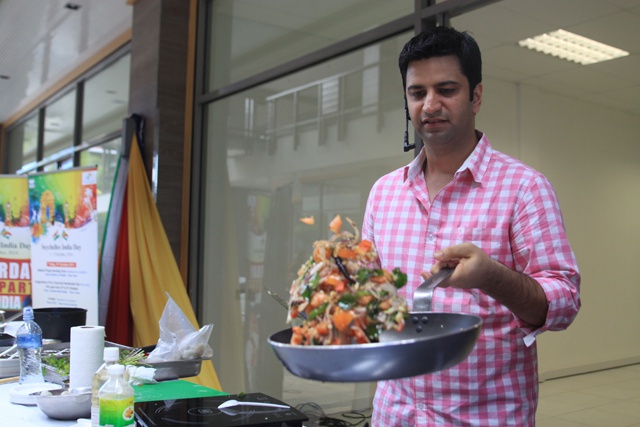 (Seychelles News Agency) - As some of India’s brightest stars came to wow crowds during the second annual Seychelles-India Day celebrations last weekend, Seychelles was caught up in Bollywood fever, experiencing the culture of India in all its glitz and glamour. But one of the stars, Kunal Kapur, did not come to sing or dance but rather to share some of India’s most refined culinary delights with the Seychelles.

Showing off his extraordinary skills to a crowd of people gathered at the Eden Plaza on the main island of Mahé, Kapur gave useful hints on how best to utilise herbs and spices together to bring out the best taste in food.

Kapur, who has starred in all three seasons of Masterchef India and was named by Food and Nightlife Magazine as one of the 15 best chefs in India, prepared several dishes and invited members of the audience to take part in tasting his creations.

While making his aubergine peanut chutney, he explained that such a dish could be stored in a jar like jam and kept in the refrigerator and used on parathas or even on toast. He also made a sumptuous prawn curry in coconut milk as well as an unusual kebab recipe made from papaya, grated potatoes and some choice Indian spices, served up with a delicious mango salsa.

New-Delhi born Kapur, who realised early on that his biggest passion and destiny in life was cooking, told the assembled audience that he was currently writing a new book entitled “Men Don’t Cook” to challenge the misconception that it was the job of a woman to cook. It is clear that Kapur believes that it is just as acceptable for a man to be in the kitchen as it for a woman.

Growing up in a large extended Punjabi family, he would spend his Sundays in the kitchen with all the men in his family. On his website, he described how he would sit on the big kitchen counter and watch his father, uncles and grandfather work together in the kitchen cooking meat and chicken and talking about how their week was.

“It was this place where I first discovered that men cook, and it’s perfectly ok for men to cook. I would occasionally stir the meat and my father would teach me the names of the ingredients that went in. I am sure he did that to sharpen my vocabulary not realizing that one day that glossary of ingredients will become my life, my very reason of existence,” said the chef.