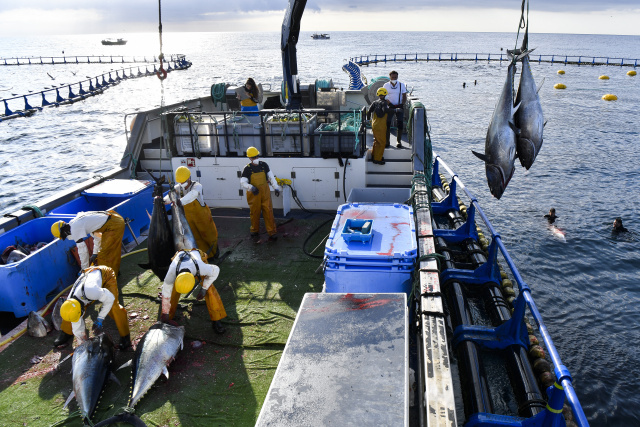 Bluefin tuna fish are extracted with a crane after being fished by divers in a purse seine at the Balfego fishing company's aquaculture facility on the open sea off the coast of L'Atmella de Mar, on July 9, 2021. Balfego fishing company is specialised in seine fishing: a selective fishing technique that involves surrounding the tuna with a net that closes at the bottom. Also, the individual extraction method and the Japanese ikejime slaughter technique they use ensure a stress-free product and superior quality tuna. (Pau BARRENA / AFP)

(AFP) - The World Trade Organization will host a ministerial meeting this week aimed at breathing life into drawn-out negotiations towards banning subsidies that favour overfishing, but numerous sticking points remain.

"The health of our oceans and our planet is at stake," she warned in a video address last week. "We simply cannot afford to miss this opportunity."

The talks aim to ban subsidies that contribute to illegal and unregulated fishing, as well as to overfishing, threatening the industry's sustainability.

While fishing should in theory be held in check by the environment, with low fish stocks pushing up costs, subsidies can keep unprofitable fleets at sea.

Global fisheries subsidies are estimated at between $14 billion and $54 billion a year, according to the WTO.

It is widely agreed that action is needed to protect a crucial resource that millions of people depend on for their livelihoods.

But 20 years of negotiations have failed to clinch a deal, with unresolved disagreements over a range of issues, including a UN demand that developing countries and the poorest nations receive special treatment.

After missing the last UN deadline to reach an agreement by December 2020, talks have intensified in recent months however.

Okonjo-Iweala, who took the reins of the global trade body in March, has made clinching the long-awaited fisheries deal by the end of this year a priority.

Thursday's meeting, which will be closed to the media, will see trade ministers discuss a draft text presented in May by Colombian ambassador Santiago Wills.

Okonjo-Iweala voiced optimism that talks on the text, which according to Wills proposes "compromise language" in a range of areas, would succeed.

"After two decades of negotiations at the World Trade Organization and marathon discussions this year, we have before us a draft text of an agreement that will put into action the global ambition to end harmful fishery subsidies," she said.

"We are on the cusp of forging an agreement at the WTO that is historic in more ways than one," she said, stressing that a deal would also show that "members can come together and act on issues of the global commons."

Reaching any kind of an agreement at the WTO can be hard, because all decisions require a consensus among all member states.

"It is my sincere hope that everyone approaches this revised text on the perspective of finding in it a possible compromise for a successful conclusion to the negotiations," Wills said last week.

But a number of sticking points remain and NGOs warn against rushing to the finish line at any cost.

"It's critical that WTO members do not sacrifice environmental outcomes for the sake of speed when negotiating a fisheries subsidies agreement," Isabel Jarrett of The Pew Charitable Trusts told AFP.

One of the main stumbling blocks has been a UN demand that developing countries and the poorest nations receive so-called special and differential treatment, or SDT.

While special treatment for the poorest countries is widely accepted, demands from some self-identified developing countries to be exempt from subsidy constraints has proved difficult to swallow.

Many of the major fishing nations are considered developing countries by WTO, including China, which has one of the world's biggest fishing fleets.

An EU official told reporters this week that a declaration from China that it was prepared to assume "full commitments without claiming SDT" would be "very helpful" to the talks.

There is also disagreement over how broad the fisheries deal should be.

There appears to be consensus around excluding fish-farming and continental fishing from subsidy constraints.

But some developing countries are calling for fuel subsidies, including through tax deduction schemes like those widely used in the EU, to be included in the deal -- something the bloc flatly rejects.

The text is also unlikely to satisfy countries like the United States, whose calls to include a ban on forced labour on fishing vessels have gone unheeded.