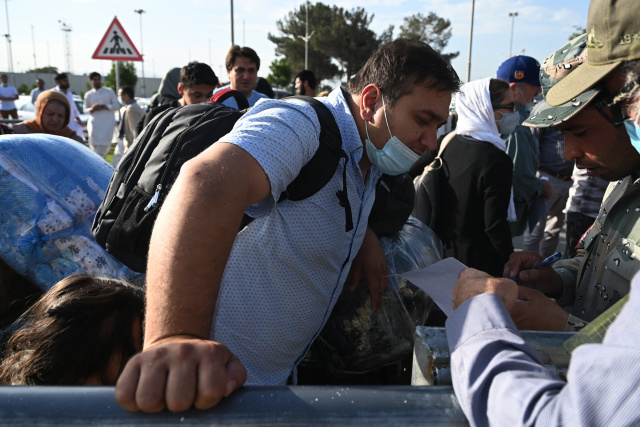 Families of Afghan nationals working with French organizations and the French embassy check their names in a list before leaving Afghanistan on a special flight to France, at Hamid Karzai International Airport in Kabul on July 17, 2021. (SAJJAD HUSSAIN / AFP)

(AFP) - France calledSaturday for its citizens in Afghanistan to leave over security concerns, its embassy in Kabul said, as the Taliban pressed on with a blistering offensive while foreign forces complete their withdrawal.

As security deteriorates, France joins a growing list of countries that have either told their citizens to leave, or evacuated them -- including, in recent days, India and China.

The government has arranged a last flight out of Kabul on Saturday -- free of charge -- "to allow the return to France of the entire French community," the embassy said in a statement.

The embassy said it will not be in a position to ensure the safe departure of citizens choosing to stay beyond July 17. It was not immediately clear how many French citizens there are in the country -- including dual-national Afghans.

"The Embassy of France formally recommends to all French citizens to take this special flight or to leave the country immediately by their own means," the statement continued.

The Taliban have launched an offensive across the country since early May, when US-led foreign forces began their final withdrawal, which is now effectively complete.

Their departure will bring to an end America's longest war, which started when it led an invasion to topple the Taliban for sheltering Osama bin Laden after the September 11, 2001 attacks.

The Taliban have swept through much of the north, and the government now holds little more than a constellation of provincial capitals that must largely be resupplied by air.

In a speech released ahead of the French National Day on Wednesday, ambassador to Kabul David Martinon said the Taliban had an "absolute disregard for the rule of law".

"The Taliban fighters plunder, burn down and destroy buildings and communication networks. They also detain and kill civilians without discriminating and attack jails," he said.

He called on the Taliban to stop their military offensive and the targeted killings of prominent Afghans that have rocked the country for months.

"In the territories they control, the Taliban publish statements that repress women and girls’ human rights," Martinon said.

"They close media in the areas they take over, to stifle freedom of speech and generate fear among Afghans."

The Taliban's offensive comes as peace talks between the insurgents and the Afghan government have largely fizzled out, with the group now appearing to be pushing for a military takeover of power.

Martinon said France's support to Afghanistan will continue "now more than ever," and the embassy in Kabul will remain open.

He said the embassy had already evacuated its local Afghan staff, their families, and also those working with French affiliates in Afghanistan.

General » Be a reporter: Write and send your article » Subscribe for news alert
Tags: Afghanistan, France

Taliban yet to name government as Panjshir resistance holds