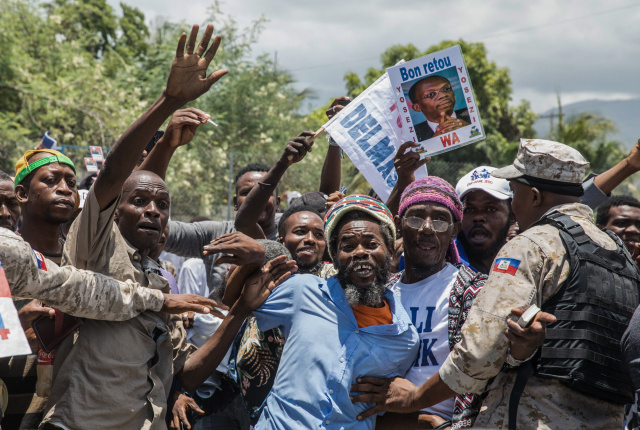 Police try to hold people back as supporters cheer and surround an ambulance carrying former Haitian President Jean-Bertrand Aristide after he arrived at the airport in Port-au-Prince on July 16, 2021, after spending nearly a month in Cuba for medical treatment. (Valerie Baeriswyl / AFP)

(AFP) - The interim prime minister who has run Haiti since the assassination of president Jovenel Moise agreed Monday to step aside and make way for an inclusive government that will hold elections, raising guarded hopes for more stability in the violence-wracked nation.

Interim Prime Minister Claude Joseph will hand over Tuesday to a new government whose primary task will be to hold elections quickly, a government official said.

The government will be led by Ariel Henry, who was tapped by Moise to replace Joseph just days before the controversial Haitian president was shot dead in his home in Port-au-Prince in the early hours of July 7.

In the hours after the assassination, Joseph declared a "state of siege" and said he was in charge, launching a power tussle in the impoverished Caribbean nation.

Monday's announcement raised hopes of ending the uncertainty and came after the United States, which exerts wide influence in Haiti, had joined other powers in making clear that Joseph should make way.

The State Department welcomed Monday's deal, while noting it was fragile, with spokesman Ned Price saying the United States was "encouraged to see Haitian political and civil actors working to form a unity government that can stabilize the country."

Haiti has no working parliament and no workable succession process, and was already mired deep in a political and security crisis when the 53-year-old Moise was killed.

Joseph and Henry met for several days on forming a more inclusive government, said the official, who is close to the prime minister's office.

"There will be no president of the Republic. The mission of this new government will be to organize general elections as soon as possible," he added.

Joseph will return to his former post as foreign minister in the new government.

Moise had ruled Haiti, the poorest country in the Americas, by decree after legislative elections due in 2018 were delayed in the wake of multiple disputes, including on when his own term ended.

As well as presidential, legislative and local elections, Haiti had been due to have a constitutional referendum in September after it was twice postponed due to the coronavirus pandemic.

The official did not give a timeline for when new elections would be held.

The balance tipped in Henry's favor over the weekend when an informal group of ambassadors -- including from the United States, France and United Nations -- known as the "Core Group" threw their support behind him.

The group called on "designated Prime Minister Ariel Henry to continue the mission entrusted to him" -- leaving out Joseph -- to form a "consensual and inclusive government."

A diplomatic source said on condition of anonymity that the US ambassador to the United Nations, Linda Thomas-Greenfield, was scheduled to travel to Haiti in the coming days in the wake of a trip a week ago by a team that included the top White House advisor on Latin America.

Haiti's interim leadership had encouraged the United States -- which occupied the country for two decades a century ago -- to send forces to improve security after much of the capital Port-au-Price was overrun by gangs.

But President Joe Biden, who is withdrawing troops from Afghanistan, has made clear he is not considering a military intervention.

France, the former colonial power, has called for the dispatch of police as part of a bolstered UN mission.

Henry, a 71-year-old neurosurgeon, has previously served as interior minister and labor minister.

Moise will be laid to rest on Friday in the northern city of Cap-Haitien. His widow Martine, who was seriously wounded in the attack on their home, was treated in a Miami hospital before returning home on Saturday to attend her husband's funeral.

As funeral preparations continue, so does the investigation into Moise's slaying. The US Federal Bureau of Investigation is aiding local police.

So far, more than 20 people, many of them retired Colombian military personnel, have been arrested in connection with the killing, but the motive remains murky.

Haitian police have accused a 63-year-old Haitian doctor with strong ties to Florida, Christian Emmanuel Sanon, of being a mastermind of the plot and having "political objectives."

Colombia's police chief Jorge Vargas has said that a former Haitian justice ministry official, Joseph Felix Badio, gave two of the Colombian mercenaries the order to kill the president. But it is not clear if Badio in turn was following orders from someone else.