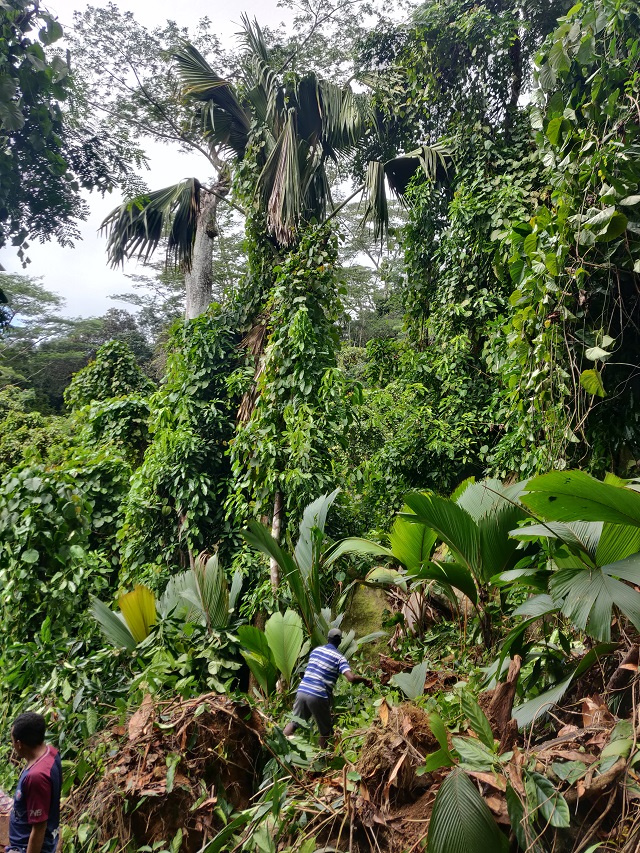 The endemic coco de mer is facing threats of the sprawl of invasive plants that could potentially affect its future existence on Silhouette. (Island Conservation Society)

Silhouette, which is Seychelles' third largest granitic island, is one of the richest biodiversity hotspots in the western Indian Ocean with many endemic and threatened plant and animal species. Conservation on the island is managed by the Island Conservation Society (ICS).

According to ICS "from the island's La Passe, a steep trail leads to the Jardin Marron garden of coco de mer palms. Situated at 400 metres' altitude, just before reaching the crest at the top, the endemic coco de mer is recently facing threats of the sprawl of invasive plants that could potentially affect its future existence."

The alien species -- Merremia peltate -- commonly known as Lalyann gran fey in Creole, are usually found on the main island of Mahe and Silhouette. They are known to be aggressive and vigorous invasive creepers. This coarse climbing vine, with underground tubers, tends to spread out of control.

The invasive plants  first grow in small areas, then extend rapidly, crawling onto indigenous species, strangling, and smothering them. The plants can grow up to 20 metre and can easily suffocate the garden's population of towering adult coco de mer plants, as wells as the juveniles.

The coco de mer is the world's largest and heaviest nut, which when mature weighs between 15 and 30 kg. The species is endemic to Seychelles, an archipelago in the western Indian Ocean, and grows naturally on Praslin and Curieuse.

The palm is a dioecious species which means it has both a male and female plant. It is already on the International Union for Conservation of Nature (IUCN) Red List of threatened species.

Since its introduction to the hill of Silhouette in the 1940s, the endemic palm population of about 4000 square metres, has been thriving well at the heart of Jardin Marron.

The Island Conservation Society says that its objective is to keep maintaining a healthy habitat for the plants and promote germination.

Conservation » Be a reporter: Write and send your article » Subscribe for news alert
Tags: Island Conservation Society, International Union for Conservation of Nature