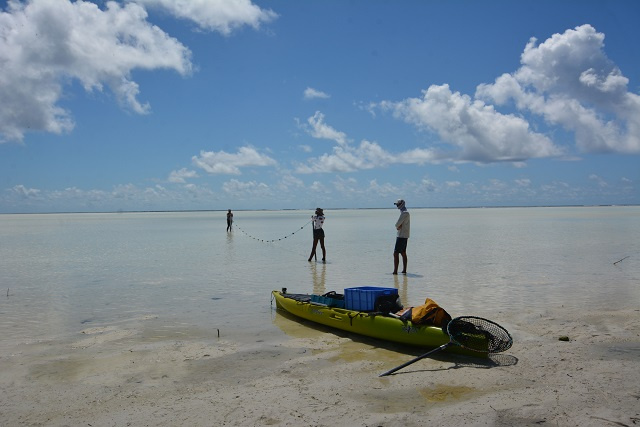 (Seychelles News Agency) - The priority of the D'Arros Research Centre of the Save Our Seas Foundation is to continue several interesting student-led projects with a focus on the conservation of species of concern, said an official from the Foundation.

In January this year, the centre resumed its operation with a new team of researchers under the leadership of research director Robert Bullock and programme director Henriette Grimmel.

Bullock who was a former postdoctoral researcher for the International Union for Conservation of Nature (IUCN), joined the Save Our Seas Foundation in mid-2020.

Bullock said that his priority will be to continue with existing research, but the centre is now also supporting external researchers who have received the Foundation's keystone grants as they conduct marine mammal surveys and sample coral.

Since its establishment in 2004, the centre has conducted several types of research focusing on marine and tropical conservation in the remote Amirantes Island group of Seychelles.

Up until last year, the D'Arros Research Centre has supported more than 20 research projects focusing on sharks, turtles, rays reef mantas, fish and corals, as well as habitat assessments and environmental surveys.

One of the Seychellois women, 19-year- old Stana Mousbe, who attended the D'Arros Experience camps in 2013 and 2014, joins the D'Arros Research Centre as a research assistant trainee.

"The experience the Foundation gave me was my very first introduction to the realm of marine biology and conservation. Before that I did not know this kind of career was an option," explains Mousbe.

She will be working alongside another Seychellois, Ellie Moulinie, who joined the team in April this year. Moulinie who has worked with various environmental groups including the Global Vision International (GVI), Green Island Foundation, Earthwatch team and the Seychelles Island Foundation, is also a research assistant.

Bullock says he is looking forward to working with the new team and that he is "also looking forward to building the team here on D'Arros. I am enjoying teaching the two Seychellois early-career scientists, Stana and Ellie, learning from them and growing the SOSF-DRC with them.'

Meanwhile, the Save Our Seas Foundation says the D'Arros Experience camp will remain as its priority to attract other young Seychellois who are fascinated by marine life. Thirty-two students attended the camp in 2013 and 2014 and several of them have gone on to pursue careers in marine conservation.

The programme director, Henriette Grimmel, is presently collaborating with the University of Seychelles to provide internships for Seychellois Bachelor's students at the D'Arros Research Centre of Save Our Seas Foundation.

For his part, the founder of Save Our Seas, Abdulmohsen Abdulmalik Al-Sheikh, said he is delighted to welcome the new team and to see them expand the conservation efforts in Seychelles, an archipelago in the western Indian Ocean.

"Alongside research, education is at the core of the foundation, and it is heart-warming to be inspiring the next generation of Seychellois ocean ambassadors", he concludes.

General » Be a reporter: Write and send your article » Subscribe for news alert
Tags: D'Arros research centre, Save our Seas Foundation