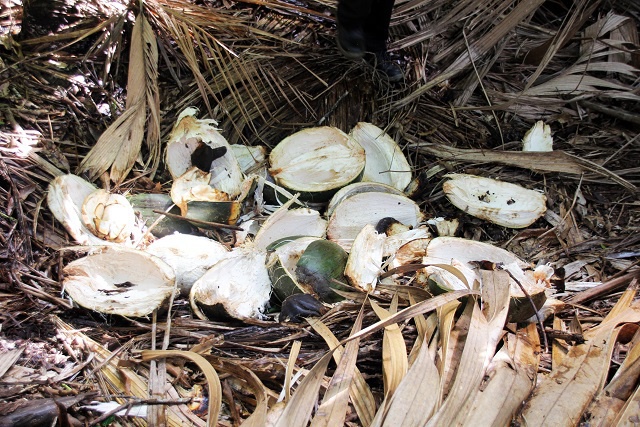 (Seychelles News Agency) - The environmental organisation that manages the Seychelles UNESCO World Heritage Site of the Vallée de Mai has reported that poachers have stripped endangered coco-de-mer nuts from a palm tree in the reserve.

Staff from the Seychelles Islands Foundation reported on Saturday morning that one of the most iconic female coco-de-mer palm trees, thought to be over 40 years old, in the natural palm forest had been attacked, with the poachers leaving only the outer husks of its ten stolen nuts behind on the ground.

Another tree with smaller nuts was also targeted, bringing the total of stolen nuts to 18.

It takes six to seven years for one coco-de-mer nut, which can weigh up to more than 35 kilograms, to mature.

“All our years of hard labour,” said security guard Andrea Radegonde to SNA, “has gone to waste.”

Radegonde is just one of the many security guards who patrol the 19-hectare reserve on the lookout for illegal activity, but the reserve’s borders are porous and the area is intersected by a public road.

The coco-de-mer nut is the world’s largest seed and is listed as “threatened” on the International Union for Conservation of Nature (IUCN)’s Red List. The kernel of the mature palm, located inside the nut, is sometimes thrown away and the suggestively-shaped outer shells sold as souvenirs for tourists.

Another important reserve on Praslin, 'Le Ravin de Fond Ferdinand', which has an area of 122 hectares of endemic plants including several coco-de-mer palms have not escaped the scourge of poachers.

“We invest 85,000 rupees every month in eight security officers to patrol our reserve,” Gardette told SNA. “This is the only way we have found to curtail and discourage poaching”.

Incidents of poaching in these two tourist attraction sites of Praslin are reported to the Seychelles Police, but others on reserves such as Fond Peper, a forest located adjacent to the Vallée de Mai are not as commonly spoken about.

Only last month, through a similar night of poaching, it lost several mature nuts. 'Fond Peper' is of equal importance in the protection of this endemic plant, as it has numerous female trees and helps to host nests for the endemic bird of Praslin, the elusive black parrot.

Poaching common on the whole island

It seems that the whole island has become a magnet for coco-de-mer poaching. The Seychelles National Parks Authority, (SNPA), which oversees endemic plants and forestry protection on the island, says the coco-de-mer nuts are stolen regularly throughout state lands although there are increasingly fewer to steal.

Speaking to SNA, the manager of SNPA on Praslin, Allen Cedras, said there is a need for a greater collaborative effort to protect the endemic nuts.

“In the vicinity of the Vallée de Mai, we use to have many trees with lots of nuts, but these are becoming increasingly rare as the poachers are also now targeting immature nuts, which are considered a delicacy,” said Cedras.

Saturday's poaching incident at Vallee de Mai was documented and shared on SIF’s Facebook page on the same day, with a number of angry comments from SIF’s Facebook fans, some suggesting a connection between the theft and the first culinary and arts festival held on Praslin at the beginning of September organised by the Ministry of Tourism and Culture, during which Ice creams, breads and pastries were prepared using the dried coco-de-mer kernel as one of the main ingredients.

The coco-de-mer kernel has been available on the export market for some time now, with keen demand from Asia as the palm kernel is believed to be an aphrodisiac in some Asian culinary circles.

However, the recent decision to make the product available locally during the weekend festival in September had been creating fear that encouraging the consumption of the delicacy would encourage poaching of the nut from inside the fragile ecosystem of the UNESCO World Heritage Site.

Contacted by SNA, the Seychelles Minister for Tourism and Culture Alain St Ange rejected the thought that the poaching incident is linked to the recent culinary and arts fiesta.

"I am sad that some Seychellois are destroying something that is part of our heritage," he told SNA .

For St Ange, the poaching of coco-de-mer is due to the high demand for this product internationally where it sells for over $400 per kilogram in the Asian markets.

It is illegal for somebody leaving the country to be in possession of a coco-de-mer without the necessary permit but the law St Ange said "does not prohibited someone from having in his/her suitcase the kernel of the coco de mer that have been cut into pieces" adding that "it is very easy for someone to travel to Singapore and get a good sum for this."

"Together we need to see how best to protect this natural resource the same way that the environment of our endemic species and our beaches are protected."

Endemic to the Seychelles, the coco-de-mer nuts rarely reproduce naturally in its native habitat due to overharvesting, and the IUCN reports that the palm tree has gone locally extinct on several islands where it used to occur. Now classified as an endangered species, fewer than 9,000 mature individuals are thought to be left in total.

With even the privately-owned palms protected and regulated by law, the nuts are now in high demand, usually fetching between $450 and $750 each, while the edible kernel is sold for an estimated $250 per kilogram.

The environment officer on Praslin, responsible for the conservation of coco-de-mer and other endangered species, Victorin Laboudallon, told SNA that most of the reported cases of poaching of coco-de-mer often go unsolved.

“This is not due to a lack of evidence, but the lack of collaborative efforts amongst the authorities in order to make the cases strong enough to be prosecuted,” said Laboudallon.

Conservation » Be a reporter: Write and send your article » Subscribe for news alert
Tags: Seychelles Island Foundation, Coco-de-mer, Ministry of tourism and culture