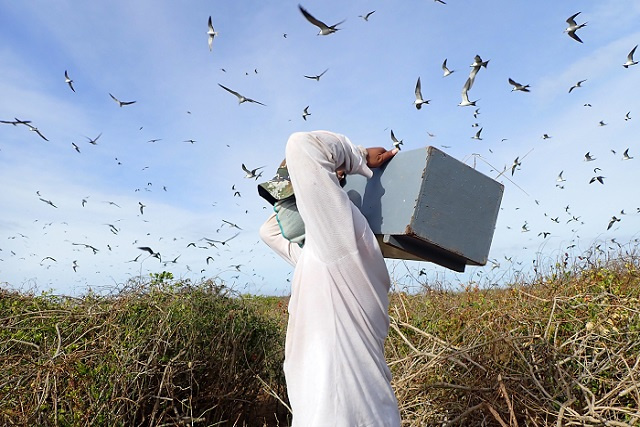 The census was to determine the bird's population, size and distribution of colonies and the level of egg harvesting in Seychelles. (Islands Development Company)

(Seychelles News Agency) - Preliminary results from a national census show a general decline in the colony size of sooty terns nesting in Seychelles, as the species continues to face a number of challenges.

The Ministry of Agriculture, Climate Change and Environment in partnership with the Islands Development Company (IDC) and  Island Conservation Society (ICS) carried out the census between June 1 and June 24.

The census was held with the aim of determining the bird's population, size and distribution of colonies in Seychelles. It also aimed at establishing the level of egg harvesting in Seychelles, an archipelago in the western Indian Ocean.

To support the implementation of the census and ensure that correct information is collected, the Ministry declared 2021 as a closed season for birds' eggs collection, effective since June 1.

The director general at the Biodiversity, Conservation and Management Division at the ministry, Marie-May Muzungaile, said the team of 20 carried out the census on nine islands where there are known nesting colonies of sooty terns. These include Cosmoledo, Desnoeufs, Bird, Aride, Recif, Farquhar, Etoile, Boudeuse and African Banks.

"Preliminary results show that there are still a lot of challenges affecting the species, and this still includes poaching incidents, pressure on the quality of the habitat that the birds nest in as well as the availability of food in these areas," said Muzungaile.

She added that preliminary results also show that "eight out of nine islands on which we carried out the census, there is still a population of sooty tern nesting there." No sign of a sooty tern colony was found on Boudeuse.

"However, we have seen that there is a general decline in the number of birds there. Desnoeufs, Bird and Cosmoledo are the three islands on which the larger populations are found," she continued.

During the census, the number of eggs found in nests was counted to register the egg density. The team also did colony mapping to establish the size of the colonies and Muzungaile outlined that each egg found on the ground represents two birds.

Since the completion of the census, the team has been transcribing all the field data following which analysis will be carried out. This will provide the Ministry with the necessary knowledge so as to provide recommendations on the way forward when it comes to the management of the species. Final results are expected to come in by October or November.

Found throughout the world's tropical seas, and as the most abundant seabird in Seychelles, the eggs of this species are a traditional food delicacy and have been harvested in large numbers across many of the islands. During open season, IDC and Birds Island management are the two entities mandated with sooty tern egg collection and sale in Seychelles.