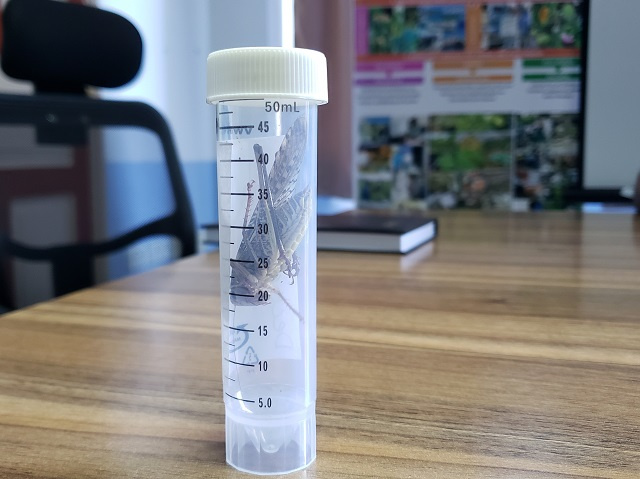 Bush crickets are not deemed to be a hazard for Seychelles, but officials had shut down the cargo area for tests. (Salifa Karapetyan, Seychelles News Agency)

(Seychelles News Agency) - A preliminary analysis carried out on two insects caught in the cargo area at the Seychelles international airport on Tuesday indicates that they are bush crickets rather than locusts as previously thought.

Bush crickets are not deemed to be a hazard for Seychelles, but officials had shut down the cargo area for tests.

The chief executive of the National Biosecurity Agency (NBA), Marc Naiken, told a press conference that "the two insects were intercepted on the Turkish Airlines TK 748 coming from Turkey and arriving in Seychelles on Tuesday July 20 at around 11.05."

"While documents were being verified by NBA officers, an officer from Air Seychelles discovered and caught an insect that was jumping on a box of watermelon. The insect looked like a locust," said Naiken.

Another similar insect seen flying in the cargo terminal was also caught and placed in a container to prevent it from escaping.

"The health authority was notified and a decision was taken to fog the entire area to ensure that no other insect that might have gotten into the cargo area from escaping. A buffer area was also fumigated," continued Naiken.

Air Seychelles notified all airlines coming in that the cargo area was subsequently closed so that no further unloading of cargo was to take place that day.

Naiken explained that the next morning officers went to the cargo area at 6.00 a.m. to verify if there were any more insects. After a thorough inspection, the perishable goods were released.

The flight was carrying goods for five importers who were bringing 32 varieties of fruits and vegetables to Seychelles, an archipelago in the western Indian Ocean. Among the goods was frozen processed pork meat.

"Once we caught the insect, our staff started working to identify the insect so as to have a preliminary identification, which was needed to help us know what risks it could have posed if any had escaped," said Naiken.

He outlined that based on the information gathered, results showed that the insects were two male bush crickets, a creature that is not dangerous.

"This kind of insect feeds on other insects as well as tender grass. It lives in the Mediterranean area. We will be sending a sample to our regional partners to do a confirmation analysis," said Naiken.

"According to biosecurity laws, the onus is on the captain of the airplane to ensure that they do not bring in any pest, insects or disease that will have an adverse effect on the economy or ecology of the country. Any action taken will be directed towards the airline as they were the ones who accepted the goods. They will be the one to deal with the border control in Turkey for not doing their jobs properly," said Naiken.