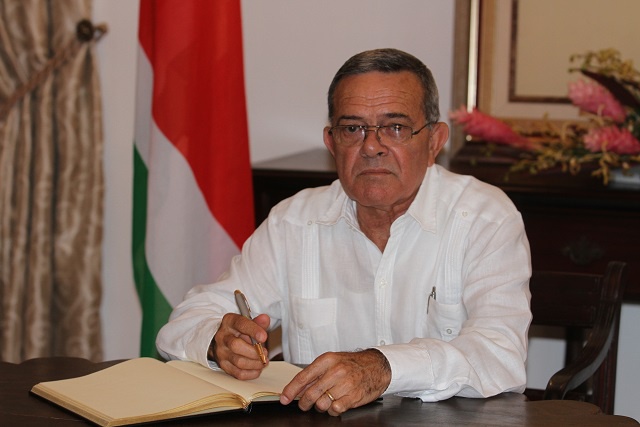 (Seychelles News Agency) - Cuba is keen on strengthening cooperation with Seychelles in various fields namely education, health care amongst others.

Health and education are two fields of cooperation where good cooperation already exist between the two countries.

There are several Cuban doctors working in Seychelles and many Seychellois students have over the years been granted scholarships awarded by the Cuban government to study in various fields including medicine.

The intention of Cuba to further develop those cooperation was confirmed by the newly accredited Cuban Ambassador to the Indian Ocean island nation Orlando Alvarez Alvarez, in a press interview this morning.

He was speaking to local journalists after he had presented his credentials to the Seychelles President James Michel at State House.

Alvarez Alvarez also confirmed that the two countries are currently preparing a Memorandum of Understanding in the field of agriculture for signing at a later date.

“We are ready to keep and continue to expand the cooperation between Seychelles and Cuba in different areas that we can. Our two countries are like ‘sister nations’, we have so many things in common. We are islands with the same difficulties, we have the same things to worry about being islands, such as the issues of Climate Change and resources. We both have an economy based on agriculture.... and in our culture, if you look at a Seychellois in Havana, you won’t say if this person is a Seychellois and vice versa. So, there are many things in common and there also a long history of relationship between our leaders,” he said.

In a press statement issued this afternoon, State House said talks between Alvarez Alvarez and Michel focussed on ways to improve ties between their two countries.

“Discussion with the President centred on different avenues of cooperation to further consolidate the bilateral relations between the two countries which will add impetus to the development of the relations for the future,” read the statement.

Orlando Alvarez Alvarez is the tenth Cuban Ambassador to be accredited to Seychelles and he is based in the Indian Ocean archipelago.He served as the chargé d’affaires in Cuban embassy in Seychelles between 2012 and 2014 until his recent appointment as ambassador.