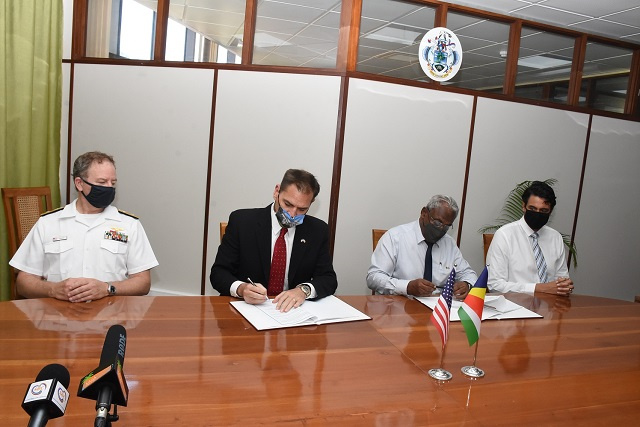 The agreement was signed on Tuesday by Minister Fonseka, and the acting Deputy Chief of mission from the US Embassy based in Mauritius, Thomas Kohr. (Seychelles Nation)

(Seychelles News Agency) - The United States Navy and the Seychelles Coast Guard will work together to protect the island nation’s territorial waters under a newly signed bilateral agreement.

The bilateral agreement on countering illicit transnational maritime activity operations was signed on Tuesday by the Seychelles’ Minister for Internal Affairs, Roy Fonseka, and the acting Deputy Chief of mission from the US Embassy based in Mauritius, Thomas Kohr.

Under the agreement, Seychelles will provide whatever resources it has, while the U.S. will bring assets including vessels and surveillance aircraft, as well as equipment and personnel towards strengthening policing within the region.

“Fully aware of the complex nature that Seychelles has in detecting, deterring and suppressing illegal activities at sea, due to our immense maritime space, it is of no surprise that we are meeting here to sign this agreement,” said Fonseka at the signing ceremony.

Fonseka added that the bilateral agreement will also help in coordinating and intensifying efforts to create a safer maritime zone.

“This agreement embodies not just our shared recognition of value but it will serve in guiding our future exchanges and operations to combat illicit maritime operations,” said the Minister.

On his side, the acting Deputy Chief of Mission from the US Embassy in Mauritius, Thomas Kohr, said that “maritime governance, which includes the protection of fisheries, preservation of ecosystems and the prevention of crime at sea, is a shared responsibility. Together, the Seychelles and United States will strengthen the global network of like-minded partners countering these illicit threats.”

Negotiations for the agreement took about two years to complete and was approved for signing by the National Assembly in May this year.