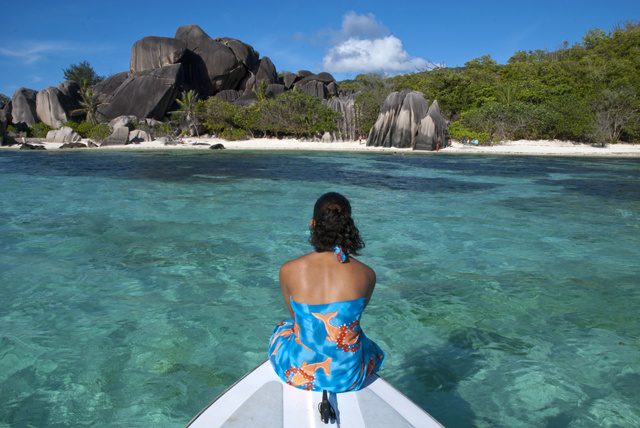 Since the reopening of Seychelles' borders to commercial passenger flights on March 25, the island nation in the western Indian Ocean has welcomed 59,218 visitors. (Gerard Larose, Seychelles Tourism Board)

(Seychelles News Agency) - Seychelles has been performing above its targeted best-case scenario when it comes to visitor arrival numbers from April to June, the tourism principal secretary said Tuesday.

Sherin Francis gave an overview of market performance, which kickstarted the Tourism Department's virtual Mid-Year Marketing Meeting. The meeting brings together local tourism partners to discuss issues relating to the marketing of the destination for the following year.

It is the first such meeting with the tourism industry since the restructuring of the Department this year. It is an opportunity for the local trade partners to be updated about the current state of markets and to hold discussions on the marketing strategy for the rest of 2021.

During the past three months, a total of 40,000 visitors had been expected according to predictions made by the department. However, for April, May, and June, Seychelles saw 43,659 visitors, surpassing the best-case scenario that was set.

Since the reopening of Seychelles' borders to commercial passenger flights on March 25, the island nation in the western Indian Ocean has welcomed 59,218 visitors.

Francis said that the rolling day average since March 25 is 510 visitors per day.

"This is half of what we were doing in 2019. On July 20, we had one of the best days since we reopened our borders, where we had 8,580 visitors present in the country. This is linked to the Eid Holiday, where we get a lot of visitors from the Middle East. During a good year like 2019, we have an average of 10,000 visitors in the country at any given time. This figure goes up to 15,000 on special days such as Christmas and Easter," said Francis.

She also outlined that the top leading market at the moment – Russia – broke its 2017 record in terms of the number of citizens who came into the country for the year from 13,191 to 13,996 already for this year.

"We are still in July, and if everything remains the same for the Russian market, it might become a market that we will be able to continue relying on for the rest of the year. It is Aeroflot that is bringing in the majority of Russian visitors into the country at the moment and the airline has plans to add another flight later on during the year, which will amount to five flights per week," said Francis.

The next three top performing markets are Israel, the United Arab Emirates (UAE), Israel, and Germany.

Francis also outlined that Seychelles is one of few travel destinations in the world that is performing above average when it comes to global travel.

"At the moment the world average is still really low as it is still struggling in terms of global travel. The type of travel that has picked up the most is domestic travel. When we compare our performance to the world average, it is way higher. There are other destinations that are doing well, but they are minimal," she said.

She credited this good performance to Seychelles being a safe destination in regards to the pandemic.

"Visitors are looking at how the pandemic is being managed in the destination, how the rate of infection is being managed, and what measures are in place to protect them. Other factors affecting travel are the availability of direct flights as there are still fear among travellers that should they go through a hub, the risk of being infected is higher," said Francis.

Going forward, Francis said that she and her team are thinking about continuing with their communication plans, many of which are being done digitally.

"We are using Seychelles Travel and social media a lot to communicate with our consumers. There are one or two markets where the strategy varies - France is one that we will carry out more direct communication. There are a few markets where in-person events have resumed and we will be selecting the ones that we will take part in, but as much as possible we will do things virtually because we know that we have a lot of challenges and budget is one of them," she explained.