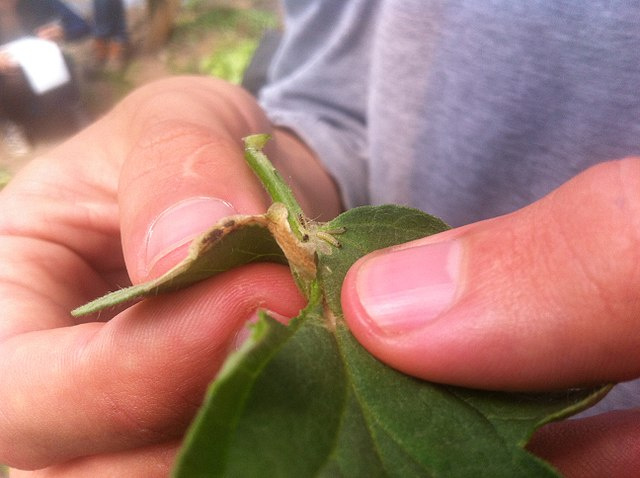 The authorities were alerted on July 21 that certain farms at Amitie Praslin had discovered the presence of a pest. (Astronatas, Wikimedia) Photo License: CC BY-SA 4.0

(Seychelles News Agency) - The National Biosecurity Agency has imposed restrictions on the movement of tomatoes between the Seychelles' three main islands after a caterpillar known as the tomato leaf miner or tuta absoluta was found on these islands.

The Agency first found the tomato leaf miner on Praslin and La Digue, the second and third most populated islands, and then more recently on Mahe, the main island.

The authorities were alerted on July 21 that certain farms at Amitie Praslin had discovered the presence of a pest.

The principal biosecurity officer for post border section at the Agency, Ravi Moustache, told a press conference on Tuesday that the Agency "conducted an emergency visit and we identified the pest as the tomato leaf miner. Following this we implemented an emergency response plan in our attempt to contain the spread of the pest and also if possible eradicate it."

The restrictions are part of the Agency's emergency strategy to contain and eventually eradicate the pest from the country's shores.

"Some of the measures include a restriction of movement of tomatoes between the islands, on-farm measures such as spraying with approved pesticides, mass trapping, monitoring and surveillance with traps and advising farmers on the best practices," said Moustache.

The tomato leaf miner, which originated from South America, is a highly destructive insect that can ruin tomato and other crop plants of the nightshade family, including potato, eggplant, pepino, pepper and tobacco.

The insect can spread rapidly as it has a high reproduction rate and can lay up to 250 eggs.

The Principal Secretary for Agriculture, Kevin Nancy, said that this is why the Agency is implementing a national biosecurity programme and restricting the movement of tomatoes from Mahe to Praslin and also on La Digue.

"We usually have our own leaf miner but this tuta absoluta is much more aggressive, so when it is found in the tomato crops it is very destructive," he added.

The National Biosecurity Agency has been informed of an infestation on a farm in the eastern Mahe district of Au Cap and is urging farmers and members of the public who grow tomato plants to examine their plants for the presence of the leaf miner. If they do find the presence of the pest, they should inform the agency.

The public is also advised that if they find the pest in their tomatoes, to dispose of it by burning to prevent further spread.

Meanwhile, the Agency will continue to determine how far the infestation has spread and take the necessary control measures.