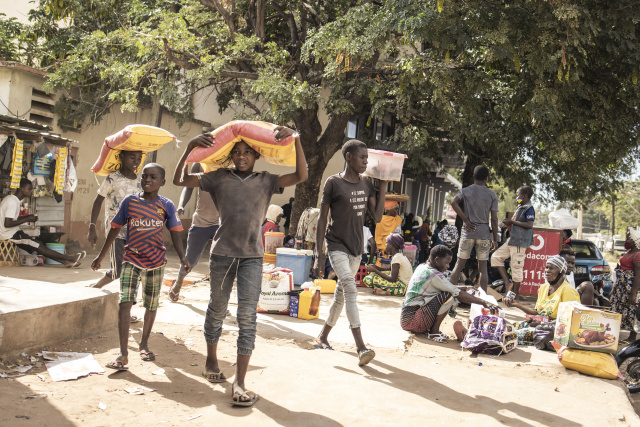 Muslim Worshippers do their ablutions ahead of their afternoon prayers in the historic neighbourhood of Paquitequete in Pemba on May 24, 2021. The Paquitequete is where most displaced people arrive by boat from the violent north, the community has taken in thousands of displaced people into their homes. Pemba, the capital of Cabo Delgado is hosting tens of thousands of people fleeing from violence wreaked by Islamist insurgents across the northern province for over three years. (JOHN WESSELS / AFP)

(AFP) - South Africa is sending almost 1,500 troops to Mozambique to help its neighbour battle jihadists wreaking havoc in the gas-rich north of the country, part of a growing multinational force there.

In a statement on Wednesday, parliament said President Cyril Ramaphosa had authorised the deployment of as many as 1,495 soldiers to support Mozambique in its fight against "acts of terrorism and violent extremists".

Attacks have escalated in northern Mozambique over the past year, fuelling fears the violence could spill over into neighbouring countries.

Since 2017, the Cabo Delgado region has been battered by a bloody jihadist insurgency that has killed more than 3,100 people, according to conflict data tracker ACLED, and displaced more than 800,000 people.

The three-month mission for South Africa's force -- from July 15 to October 15 -- is part of a deal agreed in June by the 16 nations of the Southern African Development Community (SADC).

The operation is expected to cost the country more than 984 million rand (about $66 million), said the parliamentary statement.

South Africa is the latest country in the region to despatch troops to Mozambique after Botswana, which sent soldiers on Monday. Earlier this month, Rwanda sent in a 1,000-strong force.

On Tuesday the Angolan National Assembly approved the deployment, from August 6, of 20 military personnel as part of the SADC mission.

The SADC approved the deployment of its "Standby Force" late last month to help smoke out the Islamic State-linked militants that have been terrorising its gas-rich north for nearly four years.

In a televised address on Sunday Mozambique President Filipe Nyusi, who had long been seen as resisting foreign intervention, lauded the military mobilisation by African countries.

Foreign forces will "help Mozambican forces restore peace and stability," he said, adding "we should be afraid of being alone in fighting terrorism".

One of the most notable achievements since the arrival of the Rwandan reinforcements was regaining control at the weekend of a police station in Awase, which had been an insurgent base for nearly a year.

Nyusi announced on Sunday that government troops had retaken Awase -- a small but strategic settlement near the key town of Mocimboa da Praia seized by militants in August last year.

The attacks by the jihadists escalated last year, culminating on March 24 with coordinated raids on the port town of Palma in which dozens of people were killed, some decapitated, and tens of thousands displaced.

The total force size of the SADC regional deployment is not yet known.

The European Union on July 12 formally established a military mission for Mozambique to help train its armed forces battling the jihadists.

Former colonial ruler Portugal is already providing training for Mozambican troops, with Lisbon's military instructors expected to make up some half of the new EU mission.

General » Be a reporter: Write and send your article » Subscribe for news alert
Tags: SAfrica, Mozambique