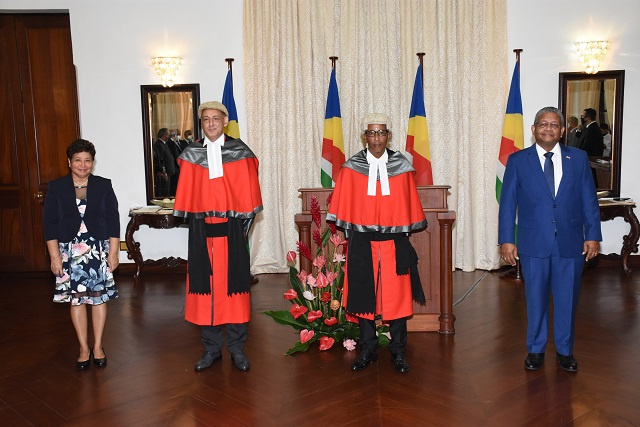 The two new justices were sworn in on Thursday before Seychelles President Wavel Ramkalawan. (Seychelles Nation)

(Seychelles News Agency) - Two Seychellois judges appointed to the Supreme Court of Seychelles say they will aim to deliver justice in a fair and timely manner.

Brassel Adeline and David Esparon were sworn in at State House on Thursday, taking the oath of allegiance and judicial oath before Seychelles President Wavel Ramkalawan as well as other government, judicial officials and close family members.

Speaking to the press following the ceremony, Adeline said that the judiciary is one of the institutions of the state that is really important as it has the oversight responsibility for other institutions in a democratic society.

“We know that the public has a high expectation when it comes to justice. In the years that have passed, judges and the judiciary have done all that they could to elevate justice in Seychelles and at the same time make sure that justice is delivered in a fast manner as justice delay is justice denied. My appointment and that of my colleague will provide two other sets of hands that will help deliver justice so that the expectation of the public is met. My role as an individual will be to do my part as a judge and deliver justice according to the law,” he added.

He was later appointed as the secretary of the family tribunal, a post he held for nine years. He was appointed Deputy Registrar General in 2007 and Magistrate in October 2009. His most recent post was as Master of the Supreme Court, a responsibility he assumed in July 2018.

On his side, Esparon said, “I know that this is a big and heavy responsibility, especially with the people of Seychelles having high expectations. I am ready to contribute to that and serve the nation. My expertise in cases having to do with money laundering, a crime I have received a lot of training in, criminal cases, civil law cases will help me better serve Seychelles. The fact that I have trained in the jurisdiction of Mauritius which is the same as Seychelles - both countries follow French laws - will also help the judiciary system, to deliver justice better.”

Esparon holds a Degree in Law with Honours from the University of Mauritius and was called to the Bar in November 2003.

During his speech at the ceremony, President said that the people of Seychelles “expect fast justice, fairness and to be dealt with according to the law. There is no place for corruption.  Seychelles is a small society where we know everybody but when somebody comes to court, justice must prevail.”

The Supreme Court of Seychelles, an archipelago in the western Indian Ocean, has a criminal and civil division. It hears appeals from all lower courts and tribunals but also has its own jurisdiction and hears the more complex and high-value civil claims and more serious criminal cases. The Supreme Court has nine judges and that includes the two newly sworn-in justices.