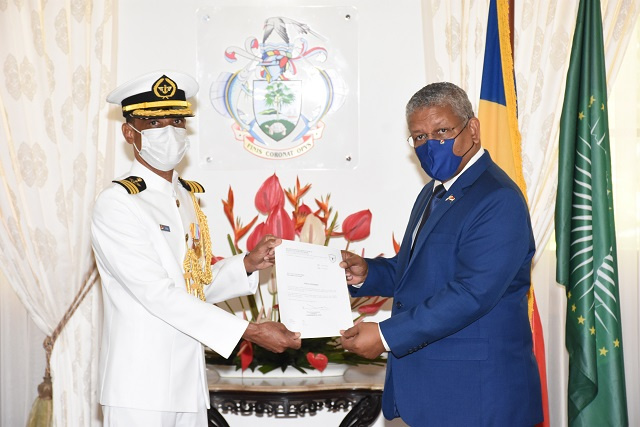 Attala, who joined the Seychelles People's Defence Forces (SPDF) in 1991, has been the acting Commander of the Coast Guard since January this year when Colonel Simon Dine was promoted to Chief of Staff.

The new Commander outlined his plans to lead the Coast Guard in the country's battle against illicit trafficking of narcotics by sea.

"The SCG has a great role to play in the current war on narcotics since it is the one guarding the Seychelles' maritime borders. In addition to that we also have other roles that include safeguarding mariners," said Attala.

After he joined the SPDF in 1991, Attala attended an officer commissioning course in Royal Military Academy in Sandhurst in 1996. He holds a master in science in Defence and strategic studies from the University of Madras.

"My appointment is the result of many years of hard work and studies that the Seychelles People's Defence Forces and the government have invested in me. I believe that they have seen that the time has finally come to give me the responsibility of leading the SCG," he said.

Among its many roles, the Seychelles Coast Guard also works in collaboration with both local and international partners to better police the waters of Seychelles, an archipelago in the western Indian Ocean.

"We work in collaboration with all local agencies that are dealing with issues of maritime security as well as other forces that are operating in the region. So we can all have a synergy in our efforts and ensure that mariners operate in a safe and secure environment," he said.

The new Commander said it is an honour to lead the Coast Guard and already has "a long work relationship with the officers. They are used to my way of doing things, so I don't think it will be difficult to bring the Coast Guard to the level the country expects."

He said there are many challenges but the Coast Guard plans to tackle them and "this will include working with many of our international partners who have shown trust and confidence in our professional abilities as coastguards."