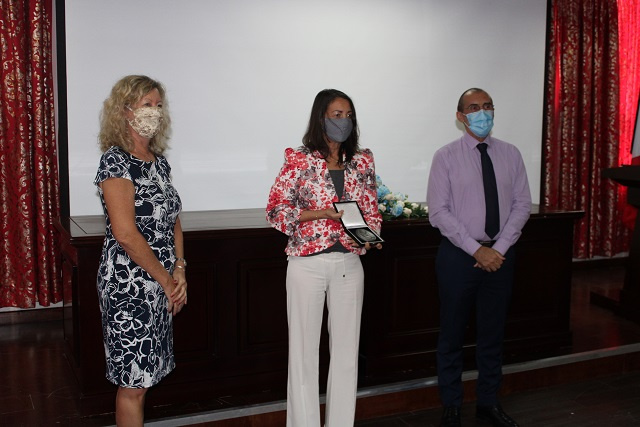 The award was presented to Twomey by the Ambassador of France for Seychelles, Dominique Mas, who praised the work done by Twomey in bringing justice to victims of sexual abuse. (Sedrick Nicette, Seychelles News Agency)

(Seychelles News Agency) - A former Chief Justice of Seychelles received a Franco-German human rights award on Friday in recognition of her work towards the defence of victims of sexual abuse, especially minors.

The Franco-German human rights award was jointly launched in 2016 by the foreign ministers in Germany and France. It recognises figures who have distinguished themselves in the defence and promotion of human rights and the rule of law.

In accepting the award, which she says is for all of Seychelles, Twomey said that "in my role as chair of the committee for the reform of child law to prevent and punish child abuse, sexual abuse and exploitation, I sought to strengthen the legal protection offered to children in accordance with the Constitution of Seychelles, and with international and regional human rights law."

The award was presented to Twomey by the Ambassador of France for Seychelles, Dominique Mas, who praised the work done by Twomey in bringing justice to victims of sexual abuse.

"You had the courage, the moral strength, to bring justice to the first cases of sexual crimes against minors. In doing so, you have punctured the abscess that plagues our countries. This evil, sexual violence against minors, is unfortunately not unique to Seychelles; it is rampant everywhere, including in our countries," said Mas.

Twomey is one of 10 people to be awarded this prize for 2020. She is joined by six other women who have done exceptional things in the defence of human rights.

Twomey is the first female judge in the history of the Seychelles. She also was the first woman to be appointed Chief Justice in August 2015. She stepped down in April last year. As a member of the Constitutional Commission, she helped draft the country's new constitution between 1992 and 1993 for the Third Republic, when Seychelles, an archipelago in the western Indian Ocean, became a multiparty state.

She recently presented the president with a proposed Sexual Offences Bill which will aim to drastically change some of the current laws.

On sexual offences in Seychelles, Twomey said there have been increasing reports of diverse acts of abuse. These have been in different settings and relationships - situations where a child is sexually abused by a relative or carer at home; raped for cash or favours; sexually assaulted or abused by an adult in a position of trust or authority; groomed or sexually exploited online by an adult or older child; exploited by organised groups of child sex offenders.

"This award will sustain the momentum necessary to bring about a sea change in these small islands to realise the work in this area and the enactment of legislation to ensure increased protection against the occurrence of child and sexual abuse and improved responses to allegations and incidents of child abuse and sexual abuse," she said.