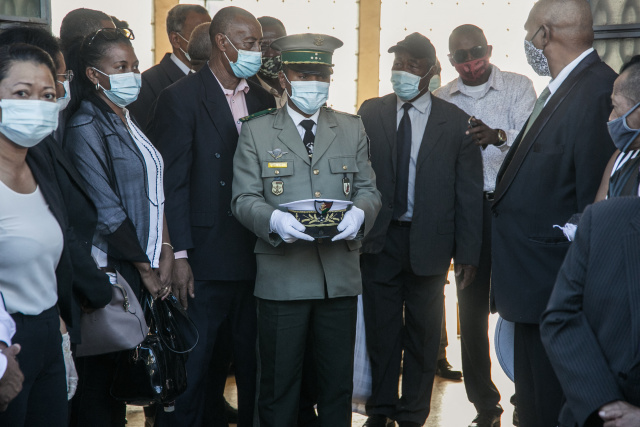 An officer of the Malagasy Army officer holds the peaked cap of Madagascar's former president Didier Ratsiraka at the morgue of the Soavinandrian military hospital in Antananarivo on March 28, 2021, following his death earlier in the morning. Madagascar's longtime former leader Didier Ratsiraka, a naval officer and instigator of a socialist revolution on the Indian Ocean island, died in the morning of March 28, aged 84, the president announced. Nicknamed "l'Amiral rouge" (the red admiral) or "Deba", Malagasy for 'bad guy' and 'boss', Ratsiraka was in power from 1975 until 1991 and returned for another stint from 1997 to 2002. (RIJASOLO / AFP)

(AFP) - Madagascar on Sunday announced the arrest of five generals as well as high-ranking police officers in connection with a failed attempt to assassinate President Andry Rajoelina, the attorney general said.

"To date, 21 people have been arrested and investigated," Berthine Razafiarivony told a news briefing.

Six people, including two French citizens, were initially arrested on suspicion of involvement in the attempt.

Among the latest arrests, "12 are active military and police personnel, including five generals, two captains and five non-commissioned officers," she said.

Four of those arrested are retired national and foreign police and military personnel, and five are civilians, she said.

Reports of the assassination plot came after several months of turbulence in the island nation, with threats directed at journalists reporting on the country's coronavirus pandemic and a burgeoning famine in the south of the country.

Rajoelina, 47, first seized power in March 2009 from Marc Ravalomanana with the backing of the military.

He won the last vote in December 2018, beating Ravalomanana in an election beset by fraud allegations.