Pandemic numbers: Covid surged around the world this week 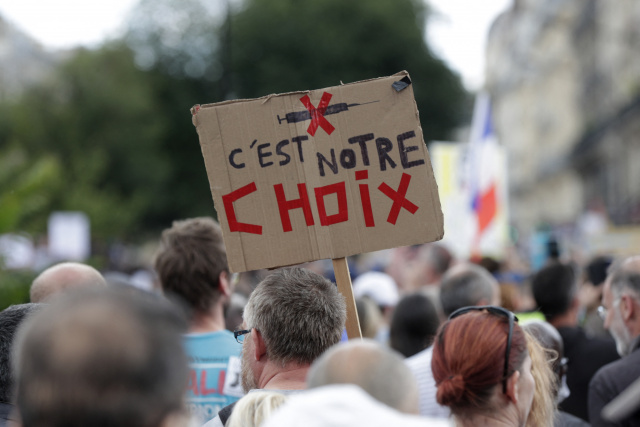 A demonstrator holds a banner reading "it is our choice" during a national day of protest against the compulsory Covid-19 vaccination for certain workers and the compulsory use of the health pass called for by the French government in Paris on July 31, 2021. (GEOFFROY VAN DER HASSELT / AFP)

(AFP) - The Covid-19 pandemic continued to surge around the world this week, especially in the United States and the Middle East.

Here is the global state of play according to a specialised AFP database.

The average number of new daily cases globally increased by 10 percent over the week to 575,918, according to an AFP tally to Thursday.

The pandemic is continuing to gain ground largely due to the highly contagious Delta variant after slowing between late April and mid-June.

The number of confirmed cases only reflects a fraction of the actual number of infections, with different countries also having varying counting practices and levels of testing.

- Flare up in North America -

The number of new coronavirus infections surged by 57 percent in the US and Canada, and rose in the Middle East by 28 percent. It increased in Asia by 11 percent, in Latin America and the Caribbean by seven percent and Africa by two percent.

However the number of new cases declined by 11 percent in Oceania and by three percent in Europe.

- Biggest drops -
Botswana saw the biggest drop with 48 percent fewer cases per day, followed by the Netherlands which had a fall of 46 percent, Zambia 42 percent, the United Kingdom 38 percent and Colombia 32 percent.

A total of 62,456 people officially died of Covid-19 around the world this week, a decrease of eight percent.

Among countries with more than a million inhabitants, Sri Lanka led the way this week giving doses to 1.78 percent of its population every day. Malaysia followed with 1.53 percent, Panama (1.44 percent), Mauritius (1.30 percent), Turkey and Ecuador (both 1.24 percent).

While they are vaccinating more slowly, the countries with the most advanced vaccination drives are the United Arab Emirates with 168 first or second doses per 100 people, Uruguay (137), Bahrain (134), Qatar (130), Canada and Chile, each on 129.

General » Be a reporter: Write and send your article » Subscribe for news alert
Tags: health, World