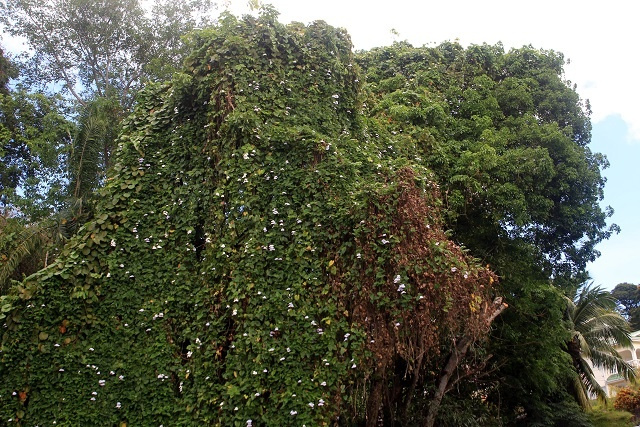 (Seychelles News Agency) - A national programme to eradicate invasive plants species in Seychelles has started and is expected to be completed in November, said a top official.

Invasive plants, particularly creepers, pose a serious threat to the Seychelles' biodiversity. Consequently, the Ministry of Environment is working on a research and development strategy to manage and control invasive creepers in the granitic islands.

The director of Biodiversity, Conservation and Management at the Ministry of Environment, Marie-May Muzungaile, told SNA that in recent years there has been an explosion in the growth of certain species in areas outside the National Parks.

Numerous works were done in the past to eradicate these species but most of them have not been successful.

"This has probably been caused by factors including forest disturbances, less removal of vines from animal fodder and an increased number of potentially invasive species being introduced or propagated as ornamentals," said Muzungaile.

With the control and management of invasive species now one of the Ministry of Environment's priorities, the national programme will look at eradicating these plants.

Some of the species being targeted in this programme includes the Merremia pelata creeper, decalobanthus peltatus or lalyann darzon in Creole, the trumpet vine and the devils ivy among others.

"The Ministry is working with its team under the Adaptation Fund project entitled 'Ecosystem Based Adaptation to Climate Change in Seychelles' (EBA project) to fund some preliminary activities to support the launch of the national campaign for invasive creepers management," said Muzungaile.

"A team of local consultants is working to map out the distribution of the invasive creepers and come up with a methodology for the removal of the plants," she added.

Work on the programme started in July 2021 and the preliminary consultancy is expected to be completed in November 2021. Muzungaile said that the rollout of the removal exercise will begin around October.

"Control of invasive species is a very complex and generally long process that will need to continue for many years to ensure that spread and re-introduction into areas cleaned are maintained," she told SNA.

Invasive plants are generally quite aggressive in their growth as they proliferate quickly. They compete against native vegetation for light, water and other resources required for growth.

Muzungaile said that creepers can choke out forests completely and some species need large amounts of water and this, therefore, affects water security.

"Some invasive plant species even have the capacity to secrete chemicals into the soil that makes it difficult for any other species to grow where they are, implying therefore that they can become whole ecosystems with only a few species," she said.

There will also be a public involvement element in the project.

"There will be a series of education and awareness targeting the general public and private landowners in particular for them to be part of the action to remove creepers from their properties and maintain their properties as well," said the director.

Muzungaile said that the public also needs to be more vigilant and to avoid introducing such species that could be detrimental to the unique biodiversity of Seychelles, an archipelago in the western Indian Ocean.

She added that the ministry wants to sensitise the public on how their activities around their home and lifestyles can contribute towards the introduction and proliferation of invasive plant species.

"Bringing exotic plants into the country illegally, clearing large properties from trees and then not maintaining it properly can allow for the colonisation of creepers," she said.

General » Be a reporter: Write and send your article » Subscribe for news alert
Tags: Ecosystem Based Adaptation