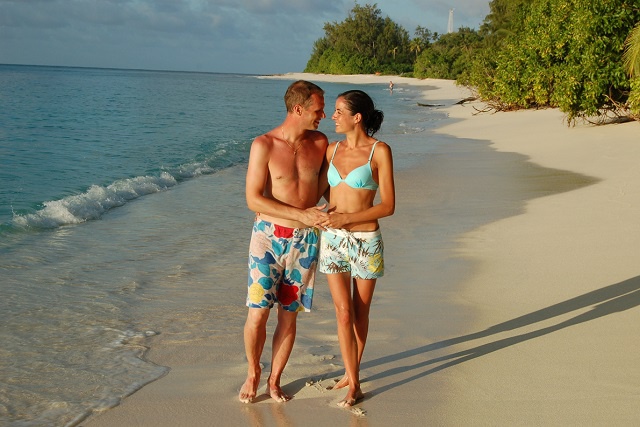 Couple holidaying in Seychelles walking on the beach on Denis Island. (Gerard Larose, Seychelles Tourism Board)

(Seychelles News Agency) - After a bit of a slow start in 2014 where overall visitor arrivals from Europe had decreased by 7 percent by mid-year compared to the same period in 2013, latest arrival figures is providing some hope that the record number of 230,272  tourists recorded in 2013 can be maintained.

According to the National Bureau of Statistics (NBS) arrival figures up to October 5, 2014 remained at the same level when compared to the same period in 2013.

In terms of arrivals for the week ending October 5, statistics show that some 5,915 tourists have come to the Indian Ocean archipelago.

According to a statement issued today by the Seychelles Ministry of Tourism and Culture this change was already forecast by the Chief Executive Officer of the Seychelles Tourism Board (STB) Sherin Naiken following her working visit to Paris last week.

"Information received from the professionals working to sell Seychelles predicted that both the months of October and November would be very good, especially the German market," Naiken told SNA.

While overall visitor arrivals from Europe up to last Sunday shows a 5 percent decrease when compared to the same period in 2013 the German market is doing quite well.

Last week some 1,053 Germans came to Seychelles on holiday bringing the total number of Germans who have travelled to the archipelago to 26,635.

"If we end the year on a positive note, it will be largely due to the German market, which is doing very well this year," added Naiken.

For the first time this year, the German market has been occupying to top spot outshining the French Market.

The French market remains in second place with 23, 615 visitors.

The Chinese market is another one that is doing quite well this year now in fourth place with 11,415 Chinese having visited Seychelles since the beginning of the year.

In its statement, the Ministry of Tourism and Culture said the dilemma for the Seychelles now that bookings are up is to ensure that there are enough airline seats.

As of December this year the national airline Air Seychelles will also be providing more seat capacity as it adds three regional destinations to its network. The airline will be launching flights to Mumbai, Dar es Salaam and Antannarivo.