'Potential hijack' of ship off UAE is over, says UK agency 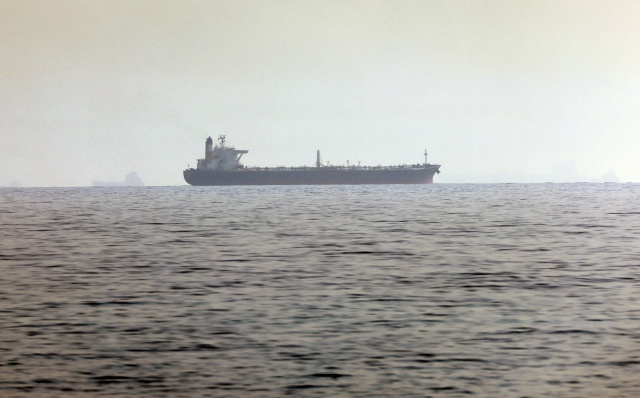 A ship is pictured off the coast of Fujairah in the United Arab Emirates on April 14, 2021. An Israeli-operated ship was attacked off the UAE opposite the Iranian coast, Israeli media said, in the latest apparent escalation between the Jewish state and the Islamic republic. Security sources, quoted by Israel's Channel 12 television, said the vessel Hyperion Ray was "lightly damaged" near the Emirati port of Fujairah, with Iran suspected of carrying out the attack. (Giuseppe CACACE / AFP)

(AFP) - The suspected hijacking of a ship in the Gulf of Oman has ended and the vessel is safe, a UK maritime security agency said on Wednesday, days after a deadly attack on a tanker in the region.

The suspected hijacking off the coast of the United Arab Emirates came just days after an attack on a tanker left two dead, which the United States and its allies blamed on Iran.

Earlier, Lloyd's List reported that armed men had boarded a Panama-flagged tanker and ordered it to sail to Iran.

And on Tuesday, the UKTMO upgraded its report of the "non-piracy" incident on the unidentified ship 60 miles east of Fujairah heading towards the Strait of Hormuz to "potential hijack".

Maritime security analysts at Dryad Global and Aurora Intelligence identified the endangered ship as the Panama-flagged Asphalt Princess, an asphalt and bitumen tanker.

The ship was heading towards Iran under the control of armed men with British and US naval operations monitoring the situation, Lloyd's List said.

Richard Meade, editor of the shipping industry intelligence site, told The Times that "armed forces have boarded the vessel, which last signalled its position around 5 pm London time, and are directing it towards Iran".

The incident at the opening of the Strait of Hormuz -- one of the world's busiest waterways -- comes days after an attack on an Israeli-linked tanker bound for the UAE, which the United States and its allies blamed on Iran.

"Reaffirming our strong commitment to regional stability and maritime security, Iran stands ready to offer assistance in case of any maritime accidents," Khatibzadeh wrote on Twitter.

The United States stopped short of assigning blame for the latest episode but State Department spokesman Ned Price said there had been "a very disturbing pattern of belligerence from Iran.

"When it comes to this specific incident, it's too early for us to offer a judgement just yet," Price told reporters.

White House spokeswoman Jen Psaki said the United States was in close touch with Britain over the "deeply concerning" incident.

While Iran has denied any involvement in Thursday's blast on the MT Mercer Street, the United States and Iran's arch-enemy Israel both say an Iranian drone caused the explosion.

Two crew members, from Britain and Romania, died on the Liberian-flagged ship, which is managed by prominent Israeli billionaire Eyal Ofer.

US Secretary of State Antony Blinken earlier vowed a collective response against Iran over the incident, which he called a "direct threat" to freedom of navigation in the oil-rich waters.

US Navy forces who came to the aid of the crew in response to an emergency distress call saw evidence of the attack, according to the US military.

The tensions come as Iran on Tuesday inaugurated the Islamic republic's eighth president, the ultraconservative cleric and prosecutor Ebrahim Raisi.

He succeeded Hassan Rouhani, considered a moderate, who sought to repair relations with the West and whose administration unsuccessfully sought to negotiate a revival of a nuclear accord with the United States.

General » Be a reporter: Write and send your article » Subscribe for news alert
Tags: Britain, UAE