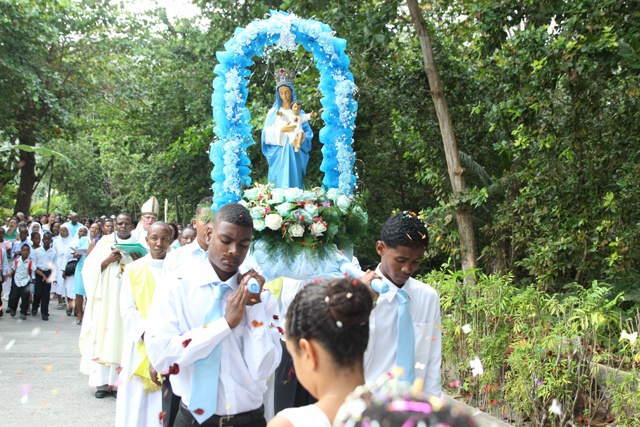 There will not be a procession this year but there will be a mass on Friday and Sunday in a bid to have smaller groups attending mass. (Joe Laurence, Seychelles News Agency)

(Seychelles News Agency) - The Seychelles' health authorities are strongly advising members of the public to refrain from going to La Digue island for the Feast of the Assumption on August 15 unless it is for work-related purposes, a top official said Wednesday.

The Aug. 15 celebration typically includes a procession and mass as well as funfairs, music concerts and sporting events. But due to COVID-19, once again this year it will be held on a smaller scale. There will not be a procession but there will be a mass on Friday and Sunday in a bid to have smaller groups attending mass.

Those who will be going to La Digue during that period will have to undergo a rapid antigen test 24 hours before going to the island, Public Health Commissioner Jude Gedeon told reporters.

The decision followed a meeting with members of the Cabinet at State House on Wednesday morning.

Under the new measure, anyone who tests positive will not be allowed to board the vessels going to La Digue. The health authorities are calling on owners of boats to ensure that there is adequate distancing between passengers and that they are strictly following preventative measures.

Gedeon explained that these latest measures were part of the local health authorities' efforts to prevent a resurgence in cases on the islands, especially on La Digue.

"We have presently less than 20 cases between Praslin and La Digue. We have seen traditionally in Seychelles that around major church celebrations. There was a surge after Christmas, and another surge after Easter. So this 15th of August if we don't do anything, we may get another surge. And we don't want that at this stage," he said.

According to the latest figures from the health authority there are only three positive cases on La Digue, the third-most populated island of Seychelles, an archipelago in the western Indian Ocean.

"Already the trend is downwards, countries are removing Seychelles from the red list and we can see the economy picking up. Our tourism industry is resurfacing and doing better while in the rest of the world things are not getting any better. It is important that certain additional measures and engagement of the public is done right away," said Gedeon.

General » Be a reporter: Write and send your article » Subscribe for news alert
Tags: COVID-19